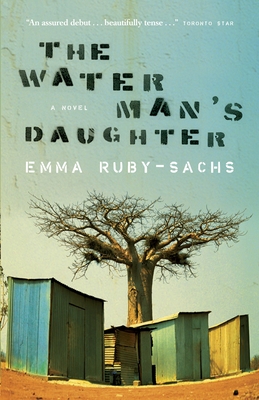 An accomplished, hard-hitting debut novel that marries a page-turning plot with the stories of three women, each of whom is struggling with decisions that will change the course of her life.

The violent death of a Canadian water company executive in a black township of Johannesburg throws together a South African anti-privatization activist and the water executive's daughter, Claire, who arrives suddenly from Canada desperate to understand her father's death. The murder investigation -- led by an officer who is finding her own loyalties increasingly unclear -- and Claire's personal quest become entwined, and the young Canadian's involvement with the activist brings her ever closer to a shocking truth she might not be able to bear. The Water Man's Daughter, like its characters, is fierce and tender, thought-provoking and emotionally rich. It introduces Emma Ruby-Sachs as an enormously talented, original, and fearless new voice in Canadian fiction.

Praise For The Water Man's Daughter…

"Ruby-Sachs brings her setting and its cast vibrantly to life: the parching heat, night-time chills, the dirt tracks and clinging Soweto dust, the families living in near-poverty yet touchingly house-proud, while their civic officials boast charmless mansions and giant plasma TVs. . . . [The final] 40 pages . . . gather up the story's themes and plot strands in ways completely unexpected, and exhilarating."
—Globe and Mail

"Ruby-Sachs has set herself an impressive agenda for a first novel . . . most notably her ripped-from-the headlines plot, authentic setting, and lively dialogue sprinkled with Zulu words and phrases."
—Edmonton Journal

"[An] impressive debut. . . . Plays like a classic whodunit, but its mystery involves how much we really know about others -- especially those people we think we know best."
—Quill & Quire

EMMA RUBY-SACHS's journalism has been published in The Nation and The Huffington Post. A graduate of Wesleyan University and the University of Toronto law school, Ruby-Sachs lived in South Africa for periods in 2003 and 2004 while studying. She has worked as a civil litigator in Windsor and Toronto and currently works with Avaaz, a progressive online organization. Emma lives in Brooklyn.
Loading...
or
Not Currently Available for Direct Purchase