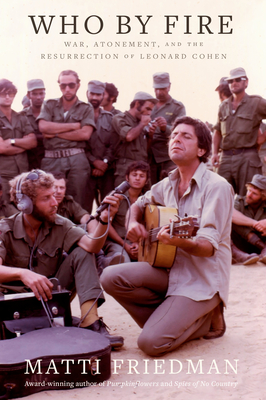 War, Atonement, and the Resurrection of Leonard Cohen

The incredible never-before-told story of Leonard Cohen's 1973 tour of Israel during the Yom Kippur War. Who by Fire is a stunning resurrection of a moment in the life of Leonard Cohen and the history of Israel. It's the story of a young artist in crisis and a young country at war, and the powerful resonance of the chord struck between them. A beautiful, haunting book full of feeling. --Nicole Krauss, author of To Be a Man In October, 1973, the poet and singer Leonard Cohen - 39 years old, famous, unhappy, and at a creative dead end - traveled to the Sinai desert and inserted himself into the chaos and bloodshed of the Yom Kippur War. Moving around the front with a guitar and a pick-up team of local musicians, Cohen dived headlong into the midst of a global crisis and met hundreds of fighting men and women at the worst moment of their lives. His audiences heard him knowing it might be the last thing they heard, and those who survived never forgot what they heard. Cohen's war tour was an electric cultural moment, one that still echoes today, and one that inspired some of his greatest songs - but a moment that only few knew about, until now. In Who By Fire, Canadian-Israeli journalist Matti Friedman gives us a riveting account of what happened during those weeks in Israel in October, 1973. With access to amazing and never-before-seen material written by Cohen himself, along with dozens of interviews and rare photographs, Friedman revives this fraught and stunning time, presenting an intimate and unforgettable portrait of the artist, and of the young people who heard him sing in the midst of combat. Who By Fire brings us close to one the greatest, most brilliant and charismatic voices of our times, and gives us a rare glimpse of war, faith, and belonging.

MATTI FRIEDMAN is an award-winning journalist and author. Born in Toronto and based in Jerusalem, he's currently a contributor to the New York Times Op-Ed Section. Friedman's last book, Spies of No Country: Secret Lives at the Birth of Israel, won the 2019 Natan Prize and the Canadian Jewish Book Award for history. Pumpkinflowers: A Soldier's Story of a Forgotten War was chosen in 2016 as a New York Times Notable Book and one of Amazon's 10 best books of the year. His first book, The Aleppo Codex, won the 2014 Sami Rohr Prize and the ALA's Sophie Brody Medal.
Loading...
or
Not Currently Available for Direct Purchase