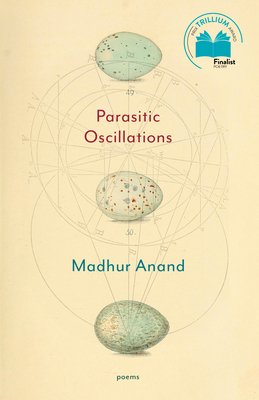 "Anand's attention to and ability to evoke explicit, exponential beauty in scientific and natural form are simply stunning. . . . Anand's debut is in every measure a triumph." –Publishers Weekly

A stunning new collection of poems that examine various aspects of living and practicing as both a poet and scientist in the Anthropocene during a time of unravelling.

The poems in Madhur Anand’s second collection interrogate the inevitability of undesired cyclic variation caused by feedback in the amplifying devices of both poetry and science.

There are several interacting currents: the poet’s own work between the arts and the sciences, living between North American and Indian cultures, as well as examining contemporary environments through the lag effects of the past. Weaving in a close reading of A.O. Hume’s The Nests and Eggs of Indian Birds (1889), anticolonial, intertextual, feminist, electronic, and diasporic relationships are examined against the backdrop of unprecedented ecological collapse. Here, birds are often no longer direct subjects of metaphor, but rather remain strange, sometimes silent, a kind of menacing and stray capacitance, but can still act as harbingers of discovery and hope.

Fluctuating through extreme highs and lows, both emotional and environmental, while examining a myriad of philosophical and ethical dilemmas, Parasitic Oscillations is an enlightening, thought-provoking, and profoundly beautiful work that both informs and questions.

“Not only does Anand repurpose scientific language, but she also makes use of figures, diagrams and photographs to expand the possibilities of the poem. Below a diagram of a phase plane portrait of a mathematical model of birdsong, Anand writes, ‘Superimposing the concept of diaspora on the movement of bird specimens around the world, tracking the co-movements of natural and cultural histories to bring to light the oscillatory, but ultimately entwined interrelations of humans and nature.’ This grounding in connection leads Anand to shift perspectives, from the human as (always) subject to the human as (sometimes) object.” —Winnipeg Free Press

“I devoured this book in a two-hour sitting, fascinated by the way Madhur Anand writes about the nineteenth-century egg and bird research collections of A. O. Hume. Anand visited natural history museum research collections in the U.S. and U.K. as well as field sites in India. She writes into mathematical simulations of birdsong and talks back to letters and diaries kept by A. O. Hume. The songs and feathers and flight patterns and habitats of extinct and extant bird species flutter through these pages, and Anand’s own life (and, perhaps, our own) is in these pages too. Parasitic Oscillations is a fascinating medley of science, philosophy, and art.” —Orion Magazine

“[A] collection of innovative poems and images . . . posing questions about ecology, power, and migration.” —poetryfoundation.org

“Madhur Anand illuminates so many slants that she sets up oscillations that will lead you into other dimensions and the amalgam that is left is curiosity and wonder. . . . Reading a book of poetry can be like going to a foreign country. It can be colourful and energetic, strange, luscious, and yet at the same time somewhat unknowable. But we feel privileged to have visited.” —GuelphToday

“Wonderful book. ...I will read it again and again, I'm sure.” —Shani Mootoo, author of Cane | Fire

“Lyric poets from many regions, traditions, and cultures have long dreamt of making the human voice approach the condition of birdsong. In Parasitic Oscillations, Madhur Anand approaches this literary problem from a wholly different angle, making birdsong her object of study with the precision and amplitude of an environmental scientist working on mathematical models of avian behavior in complex ecological systems. By the end of this innovative collection, the most ancient and universal metaphors for poetry—as song, as flight—are made new through Anand’s aesthetic research into global intimacies of the human and the nonhuman alike. ‘There are very few things / that are stronger when they are far apart,’ writes Anand. Perhaps poems can sing their song, too.” — Srikanth Reddy, professor and author of Underworld Lit

“Parasitic Oscillations traces a ‘path travelling back to a higher dimension . . . formant and filtering.’ This is a pathless path, crenallated by ‘live’ edges, industrial memory, and the time crystals of colonial (and anti-colonial) artifacts that refract beyond their capacity to be restored.  Madhur Anand has written a book that attends to an on-going ‘vanishing’ with brown clarity, in the cardinal, ever-fluxing space between ‘the actual and the desired.’” —Bhanu Kapil

“The poems in Madhur Anand’s Parasitic Oscillations track a variety of losses with all the rigor and care of her scientific training. She segues seamlessly from the loss of bird species, to the loss of a motherland and a mother, to the loss of presumed safety during the pandemic. A reader may feel a series of trap doors opening beneath her feet. This is a new, more inclusive and global eco-poetics where we too are specimens. As she warns at the end of one segment: ‘Tag yourself.’” —Rae Armantrout, Pultizer-prize winning author of Conjure

“In the formally inventive Parasitic Oscillations, Madhur Anand, once again, makes scientific inquiry both intimate and vital, but ‘There is a more inner view,’ within, as well. This is a tour de force of life and one of the greatest long poems, ‘Slow Dance,’ that I’ve ever read, period. In this collection of evidence of what is seen and of what is lived, we have a poet at the top of her game. Anand offers the brilliance of the learned and of the lived, of the curious and of the accomplished. And, yes, there’s the music of the birdsong, which Anand—lyrically, generously—offers as a soundtrack to show us how to fly. This is some soulful, beautiful work.” —A. Van Jordan, professor and author of The Cineaste

“Anand’s Parasitic Oscillations: pheasant feathers and Maxwell’s equations, imagination and analysis, metaphor and fact, sideways glance of a poet and direct gaze of a scientist, beauty and beauty.” —Alan Lightman, professor and author of Einstein’s Dreams

MADHUR ANAND's debut book of prose This Red Line Goes Straight to Your Heart (2020) won the Governor General's Literary Award for Nonfiction. Her debut collection of poems A New Index for Predicting Catastrophes (2015) was a finalist for the Trillium Book Award for Poetry, named one of 10 all-time "trailblazing" poetry collections by the CBC and received a starred review in Publisher's Weekly. Her second collection of poems Parasitic Oscillations (2022) was published to international acclaim and named the "top pick" for Spring poetry by the CBC. She is a professor of ecology and sustainability at the University of Guelph, where she was appointed the inaugural Director of the Guelph Institute for Environmental Research.
Loading...
or
Not Currently Available for Direct Purchase