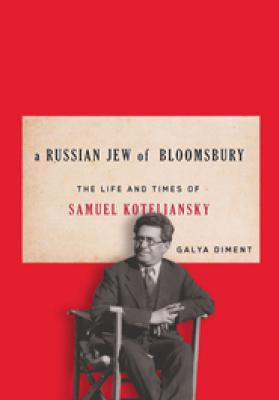 A Russian Jew of Bloomsbury (Hardcover)

The Life and Times of Samuel Koteliansky

A Russian Jew of Bloomsbury looks at the remarkable life and influence that an outsider had on the tightly knit circle of Britain's cultural elite. Among Koteliansky's friends were Katherine Mansfield, Leonard and Virginia Woolf - for whose Hogarth Press he translated many Russian classics - Mark Gertler, Lady Ottoline Morrell, H.G. Wells, and Dilys Powell. But it was his close and turbulent friendship with D.H. Lawrence, with whom he had copious correspondence, that proved to be Koteliansky's lasting legacy. In a lively and vibrant narrative, Galya Diment shows how, despite Kot's determination, he could never shake off the dark aspects of his past or overcome the streak of anti-Semitism that ran through British society and could be found in many of his famous literary friends. A stirring account of the early-twentieth century, Jewish émigré life, and English and Russian letters, A Russian Jew of Bloomsbury casts new light - and shadows - on the giants of English modernism.

Galya Diment is chair and professor of Slavic Languages and Literatures, University of Washington, Seattle.

Praise For A Russian Jew of Bloomsbury: The Life and Times of Samuel Koteliansky…

"Galya Diment has done it again. The author of the acclaimed Pniniad, about Nabokov's major model for his legendary Russian lecturer, now turns to another Russian Jew with a still wider resonance in English literature. Part biography, part cultural history of the early twentieth-century impact of Russian literature on English literature (focusing on Koteliansky as a conduit and catalyst), and part exploration of being Jewish and foreign in England and in Bloomsbury, the book teems with vivid vignettes of the emotionally complicated Koteliansky, his close friend D.H. Lawrence (and his foe Frieda Lawrence), Katherine Mansfield, Virginia and Leonard Woolf, H.G. Wells, and many more. A fascinating read for lovers of literature, culture, history, and personality." Brian Boyd, author of Vladimir Nabokov and On the Origin of Stories: Evolution, Cognition, and Fiction

"A Russian Jew of Bloomsbury brings to light the life of a significant yet regrettably little-known figure. It is a fascinating look into how Jewishness, as well as Russianness, figured in the circles of a number of eminent twentieth-century writers. In t

"In Diment's lively, perceptive, and sympathetic but objective biography, Kot steps out of the shadows and takes center stage." Booklist starred review
or
Not Currently Available for Direct Purchase
Copyright © 2020 American Booksellers Association