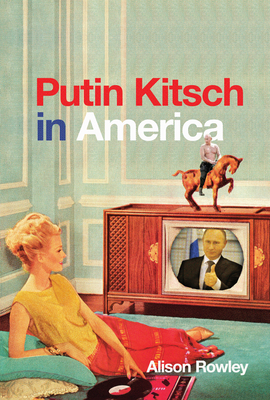 Vladimir Putin's image functions as a political talisman far outside of the borders of his own country. Studying material objects, fan fiction, and digital media, Putin Kitsch in America traces the satirical uses of Putin's public persona and how he stands as a foil for other world leaders. Uncovering a wide variety of material culture - satirical, scatological, even risqué - made possible by new print-on-demand technologies, Alison Rowley argues that the internet is crucial to the creation of contemporary Putin memorabilia. She explains that these items are evidence of young people's continued interest and participation in politics, even as some experts decry what they see as the opposite. The book addresses the ways in which explicit sexual references about government officials are used as everyday political commentary in the United States. The number of such references skyrocketed during the 2016 US presidential election campaign, and turning a critical eye to Putin kitsch suggests that the phenomenon will continue when Americans next return to the polls. An examination of how the Russian president's image circulates via memes, parodies, apps, and games, Putin Kitsch in America illustrates how technological change has shaped both the kinds of kitsch being produced and the nature of political engagement today.

Praise For Putin Kitsch in America…

"Putin Kitsch in America looks at the proliferation of political kitsch in the digital age. It's a simple premise, but Rowley explores a staggering amount of the stuff to take us on a tour of the historical, political, and psychology behind the pieces she finds." Montreal Review of Books

"Putin Kitsch in America is an engaging and extremely interesting book that is at times laugh-out-loud funny and occasionally disturbing. This is a work that ventures into an almost entirely novel field. Rowley has unearthed a treasure trove of Putin kits

Alison Rowley is professor of Russian history at Concordia University.
Loading...
or
Not Currently Available for Direct Purchase