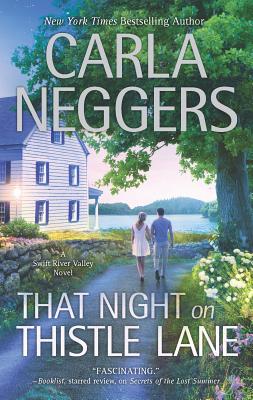 That Night on Thistle Lane

New York Times bestselling author Carla Neggers returns with the second book in the Swift River Valley series, That Night on Thistle Lane, following Secrets of the Lost Summer. More than just make-believe Librarian Phoebe O'Dunn deals in stories, but her passion for history has taught her that happy endings are rare. Her life in Knights Bridge, Massachusetts, is safe and uneventful...until she discovers the hidden room. Among its secrets is a cache of vintage clothing, including a spectacular gown--perfect for a gala masquerade in Boston. In the guise of a princess, Phoebe is captivated by a handsome swashbuckler who's also adopted a more daring persona. Noah Kendrick's wealth has made him wary, especially of women: everybody wants something. When Noah and Phoebe meet again in Knights Bridge, at first neither recognizes the other. And neither one is sure they can trust the magic of the night they shared--until an unexpected threat prompts them to unmask their truest selves. After all, it takes more than just the right costume to live out your personal fairy tale. It takes heart...and the courage to be more than you ever dreamed.

Praise For That Night on Thistle Lane…

"[A] beautifully described tale that rewards readers with an intriguing mystery as well as a deliciously satisfying romance."-Library Journal on Secrets of the Lost Summer

"Neggers captures readers' attention with her usual flair and brilliance and gives us a romance, a mystery and a lesson in history." -Top Pick, RT Book Reviews on Secrets of the Lost Summer

"Only a writer as gifted as Carla Neggers could use so few words to convey so much action and emotional depth."-Sandra Brown

"With a great plot and excellent character development, Neggers' thriller, Saint's Gate, the first in a new series, is a fast-paced, action-packed tale of romantic suspense that will appeal to fans of Lisa Jackson and Lisa Gardner."-Library Journal

"Saint's Gate is the best book yet from a writer at the absolute top of her craft."-Providence Journal

"Cold Pursuit is the perfect name for this riveting read. Neggers's passages are so descriptive that one almost finds one's teeth chattering from fear and anticipation."-Bookreporter.com

"[Neggers] forces her characters to confront issues of humanity, integrity and the multifaceted aspects of love without slowing the ever-quickening pace."-Publishers Weekly

Carla Neggers is the New York Times bestselling author of more than 60 novels, novellas and short stories. Her work has been translated into 24 languages and sold in more than 30 countries.She is a popular speaker around the country as well as a founding member of the New England Chapter of RWA, past president of Novelists, Inc., and past vice president of International Thriller Writers. She and her husband live in a house on a hilltop not far from picturesque Quechee Gorge."
Loading...
or
Not Currently Available for Direct Purchase