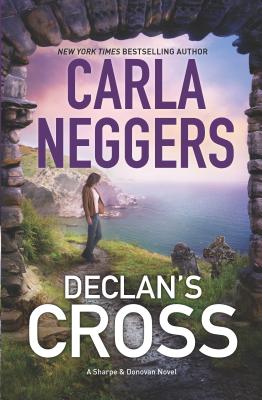 An escape to an idyllic Irish seaside village is about to turn deadly in this riveting new novel by master of romantic suspense Carla Neggers For marine biologist Julianne Maroney, two weeks in tiny Declan's Cross on the south Irish coast is a chance to heal her broken heart. She doesn't expect to attract the attention of FBI agents Emma Sharpe and Colin Donovan--especially since a Donovan is the reason for her broken heart. Emma and Colin are in Ireland for their own personal retreat. Colin knows he's a reminder of everything Julianne wants to escape, but something about her trip raises his suspicion. Emma, an art crimes expert, is also on edge. Of all the Irish villages Julianne could choose...why Declan's Cross? Ten years ago, a thief slipped into a mansion in Declan's Cross. Emma's grandfather, a renowned art detective, investigated, but the art stolen that night has never been recovered and the elusive thief never caught. From the moment Julianne sets foot on Irish soil, everything goes wrong. The well-connected American diver who invited her to Ireland has disappeared. And now Emma and Colin are in Declan's Cross asking questions. As a dark conspiracy unfolds amid the breathtaking scenery of Declan's Cross, the race is on to stop a ruthless killer...and the stakes have never been more personal for Emma and Colin.

"Heron's Cove gives romantic suspense fans what they want...complex mystery with a bit of romance. Negger's skillfully created a compelling puzzle, refusing to reveal all the pieces until the very end." -Top Pick, RT Book Reviews

"Once in a while, a writer who's been at it seemingly forever reaches a new pinnacle. Such is the case with Carla Neggers in her latest superb adventure of romantic suspense!" -Providence Journal

"Carla Neggers has emerged as the queen of the romantic suspense novel...Heron's Cove is a novel that is written with a gripping and suspenseful style that will surely have the most astute armchair sleuths and amateur detectives scratching their heads and guessing right up until the very end. Neggers does a first-rate job of creating scenes with images that are so vivid, one can almost breathe in the briny salt air along Maine's craggy coast. -Nashua Sunday Telegraph

"Only a writer as gifted as Carla Neggers could use so few words to convey so much action and emotional depth." -New York Times bestselling author Sandra Brown

"With a great plot and excellent character development, Neggers' thriller, the first in a new series, is a fast-paced, action-packed tale of romantic suspense that will appeal to fans of Lisa Jackson and Lisa Gardner." -Library Journal on Saint's Gate


"Neggers' emotionally charged story is masterful--an intense mystery and complex romance all in one. It's simply wonderful!"
-Top Pick, RT Book Reviews on That Night on Thistle Lane

"[Neggers] forces her characters to confront issues of humanity, integrity and the multifaceted aspects of love without slowing the ever-quickening pace."
-Publishers Weekly on Betrayals

Carla Neggers is the New York Times bestselling author of more than 60 novels, novellas and short stories. Her work has been translated into 24 languages and sold in more than 30 countries.She is a popular speaker around the country as well as a founding member of the New England Chapter of RWA, past president of Novelists, Inc., and past vice president of International Thriller Writers. She and her husband live in a house on a hilltop not far from picturesque Quechee Gorge."
Loading...
or
Not Currently Available for Direct Purchase