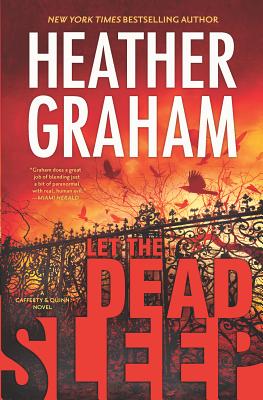 An object of desire? Or of fear? It was stolen from a New Orleans grave--the centuries-old bust of an evil man, a demonic man. It's an object desired by collectors--and by those with wickedness in their hearts. One day, its current owner shows up at Danni Cafferty's antiques shop on Royal Street, the shop she inherited from her father. But before Danni can buy the statue, it disappears, the owner is found dead...and Danni discovers that she's inherited much more than she realized. In the store is a book filled with secret writing: instructions for defeating evil entities. She'd dismissed it as a curiosity...until the arrival of this statue, with its long history of evil and even longer trail of death. Michael Quinn, former cop and now private investigator, is a man with an unusual past. He believes that doing the right thing isn't a job--it's a way of life. And the right thing to do is find and destroy this object weighted with malevolent powers. He and Danni are drawn together in their search for the missing statue, following it through sultry New Orleans nights to hidden places in the French Quarter and secret ceremonies on abandoned plantations. Cafferty and Quinn already know that trust in others can be misplaced, that love can be temporary. And yet their connection is primal. Mesmerizing. They also know that their story won't end when this case is closed and the dead rest in peace once again.

Praise For Let the Dead Sleep…

"Graham deftly weaves elements of mystery, the paranormal and romance into a tight plot that will keep the reader guessing at the true nature of the killer's evil." -Publishers Weekly on The Unseen

"Suspenseful and dark. The culture and history surrounding San Antonio and the Alamo are described in detail. The transitions between past and present flow seamlessly, and the main characters are interesting and their connection to one another is believable." -RT Book Reviews on The Unseen

"If you like mixing a bit of the creepy with a dash of sinister and spine-chilling reading with your romance, be sure to read Heather Graham's latest.... Graham does a great job of blending just a bit of paranormal with real, human evil." -Miami Herald on Unhallowed Ground

"The paranormal elements are integral to the unrelentingly suspenseful plot, the characters


are likable, the romance convincing...."-Booklist on Ghost Walk

"Graham's rich, balanced thriller sizzles with equal parts suspense, romance and the paranormal--all of it nail-biting." --PUBLISHERS WEEKLY on THE VISION

"Graham's rich, balanced thriller sizzles with equal parts suspense, romance and the paranormal-all of it nail-biting." -Publishers Weekly on The Vision

"New York Times" and "USA Today" bestselling author Heather Graham has written more than a hundred novels. She's a winner of the RWA's Lifetime Achievement Award, and the Thriller Writers' Silver Bullet. She is an active member of International Thriller Writers and Mystery Writers of America. For more information, check out her websites: TheOriginalHeatherGraham.com, eHeatherGraham.com, and HeatherGraham.tv. You can also find Heather on Facebook.
Loading...
or
Not Currently Available for Direct Purchase