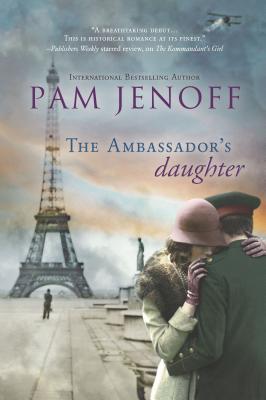 From the New York Times bestselling author of The Lost Girls of Paris. For one woman in the aftermath of World War I, the City of Light harbors dark secrets and dangerous liaisons.
Paris, 1919. Margot Rosenthal has arrived in France with her father, a German diplomat. She initially resents being trapped in the congested capital, where she is still considered the enemy. But as she contemplates returning to Berlin and a life she hardly knows anymore, she decides that being in Paris is not so bad after all. Bored and torn between duty and the desire to be free, Margot strikes up unlikely alliances: with Krysia, an accomplished musician with radical acquaintances and a secret to protect; and with Georg, a naval officer who gives Margot a job--and a reason to question everything she thought she knew about where her true loyalties should lie. Against the backdrop of one of the most significant events of the century, a delicate web of lies obscures the line between the casualties of war and of the heart, making trust a luxury that no one can afford. Look for these other sweeping epics from New York Times bestselling author Pam Jenoff. The Lost Girls of Paris The Orphans Tale The Diplomat's Wife The Kommandant's Girl The Last Summer on Chelsea Beach The Winter Guest

Pam Jenoff is the author of several novels, including the international bestseller The Kommandant's Girl, which also earned her a Quill Award nomination. Pam lives with her husband and three children near Philadelphia where, in addition to writing, she teaches law school.

"With luminous simplicity, Jenoff's breathtaking debut chronicles the life of a young Jewish bride during the Nazi occupation of Krakow, Poland, in WWII...This is historical romance at its finest."-Publishers Weekly starred review on The Kommandant's Girl

"In her moving first novel, Jenoff offers an insightful portrait of people forced into an untenable situation and succeeds in humanizing the unfathomable as well as the heroic."-Booklist on The Kommandant's Girl

"Beautifully researched, with realistic dialogue, The Kommandant's Girl is impossible to put down. Don't miss this terrific novel!"-Romance Reviews Today

"I have not been so moved by a book in quite some time as I was by The Kommandant's Girl...The remarkably accurate account of a world at war, and the repercussions of that war, make this a brilliant debut novel...Historical fiction at its best. I could not put the book down, yet was sad to see it end."-Historical Romance Writers

"In [her] successful and satisfying second novel...Jenoff explores the immediate aftermath of World War II with sensitivity and compassion, shedding light on an often overlooked era of European history. She expertly draws out the tension and illustrates the danger and poverty of Eastern Europe as it falls under communism. Highly recommended for all fiction collections."-Library Journal on The Diplomat's Wife

As the story opened, Margot appeared to be an inde¬pendent and confident young woman. How do you think her character changed throughout the story, and what caused those changes? What do you feel was her greatest strength and weakness?

How do you think the loss of her mother affected Mar¬got? How did this change throughout the book, par¬ticularly when she learned the truth?

Georg and Margot developed feelings for one another after mere days. What did you see in their time to¬gether that attracted them so powerfully? Do you be¬lieve it is possible to fall in love so quickly and for such a relationship to last?

How was it possible for Margot to keep secrets from those she professed to love most? How did it affect her relationships with her father, with Georg? Do you think that Margot’s choices were justified by her intentions?

Margot and Krysia became such close friends despite significant differences in age and circumstances. What do you think it was that drew them together, and what did each of them provide for the other? Have you ever found yourself in such a close but unlikely friendship?

Margot was a very young woman dealing with situa¬tions that most of us today would find completely over¬ whelming at age twenty. What do you think it was that Margot really wanted out of life?

What did you think about Margot’s relationship with Stefan? Could you sympathize with her, being torn by an old promise to a man she didn’t know anymore and her love for a man that offered her a promising future? What would you have done in her shoes?

Margot experienced anti-German sentiment from those around her who saw her as the enemy. Do you think this was a fair judgment, given the political climate of the time? Do you think this type of mentality still ex¬ists today?

The post-WWI era is less familiar to some readers than WWII and other historical time periods. What did you like about a novel set during this time? Did you identify with any symbolic items, people or places throughout the book? What did they represent to you?

Do you agree that Margot’s relationship with her fa¬ther improved over the course of the novel? How so, or how not?

What do you think happens six months after the end of the book? Six years?

The Ambassador’s Daughter is the prequel to two of Pam Jenoff’s other novels, The Kommandant’s Girl and The Diplomat’s Wife. If you have read those, how did you feel this book compared? Did knowing what happens twenty years down the line color your reading of this book?