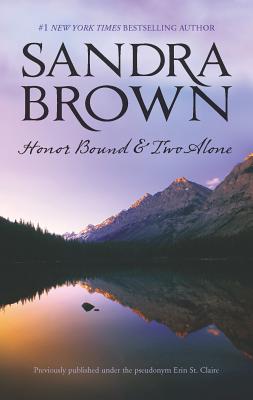 Together for the first time in one volume are two classic stroies by #1 New York Times and USA Today bestselling author Sandra Brown Honor Bound Escaped convict Lucas Greywolf will do whatever it takes to get back to his reservation home, honor bound to pay last respects to his dying grandfather--even if that means taking Aislinn Andrews hostage. Aislinn is alternately intrigued and infuriated by this misunderstood man who's made no secret of his desire for her--or of his contempt for her kind, the Anglos who betrayed his community. Yet among his people, Aislinn sees another side to Lucas. Once her captor, he is now the man she desires--the man she's beginning to love.... Two Alone When a plane crash strands her in the remote reaches of the north, confident businesswoman Rusty Carlson is hurt and alone with a man she fears. But she will surely die without the help of Vietnam vet Cooper Landry. Cooper has a deep-rooted grudge against beautiful women like Rusty, but he'll be damned if he'll let her risk his chance for survival. There are predators in the dense woods and the odds are against the pair. But what Rusty and Cooper are even less prepared for is the discovery that they desire more than just survival....

"No on understands sexual fantasy better than Sandra Brown.... Ms. Brown inventively blends a variety of fantasies into the fabric of her very real romance." --RT Book Reviews

Brown began her writing career in 1981 and since then has published over seventy novels, most of which remain in print. As of 1990, when Mirror Image made The New York Times bestseller list, each subsequent novel, including reprints of earlier books, have become Times bestsellers.

Sandra and her husband Michael Brown live in Arlington, Tx.
Loading...
or
Not Currently Available for Direct Purchase