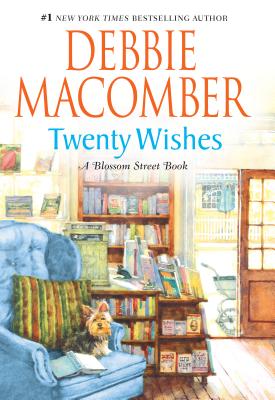 www.DebbieMacomber.com What do you want most in the world? What Anne Marie Roche wants is to find happiness again. At thirty-eight, she's childless, a recent widow, alone. She owns a successful bookstore on Seattle's Blossom Street, but despite her accomplishments, there's a feeling of emptiness. On Valentine's Day, Anne Marie and several other widows get together to celebrate...a sense of hope. They each begin a list of twenty wishes--including things they'd always wanted to do but never did. Some of the items on Anne Marie's list: learning to knit, falling in love again, doing good for someone else. When she volunteers at a local school, an eight-year-old girl named Ellen enters her life. It's a relationship that becomes far more involving--and far more important--than Anne Marie had ever imagined. As Ellen helps Anne Marie complete her list, they both learn that wishes can come true...but not necessarily in the way you expect.

Anne Marie had agreed to no children before she married Robert, then decided she wanted a baby. What do you think of her actions—and Robert’s? Could they have handled things in a better way? What would you have advised them to do? Did you sympathize with her feelings? And did you understand his reasons for not wanting a second family? Did you feel either or both of them acted in a manipulative way?

Despite wanting a child in her life and wanting to “do something for someone else,” Anne Marie is initially reluctant to get involved with the Lunch Buddy program. Why do you think this is? Inertia? Fear? A sense of inadequacy? Some other reason? What is the primary factor, in your view, that compels her to follow through?

Lillie is in many ways a conventional society matron. What gives her the courage to break out of her restricted, although privileged life? Do you think wealth and privilege typically lead to more restrictive attitudes? Realistically, do she and Hector have a chance at a successful relationship?

In what ways is Barbie different from her mother? In what ways is she similar? Why is she so attracted to Mark Bassett? Does he represent a challenge to her? Is she drawn to him despite his resistance—or because of it? Where do you see their romance going?

The relationship between Anne Marie and her stepdaughter, Melissa, undergoes a profound transformation. What exactly brought it about, in your opinion? Do you understand why the two of them had never been able to connect, considering that Melissa was 13 at the time Anne Marie married Robert? Who’s to blame for this—or is it even a question of blame? If you were Anne Marie, would you have done anything differently?

By the end of the story, Anne Marie finds what she was missing in life. And she finds it in unexpected ways. Did her list of 20 Wishes contribute to making this possible? If so, how? Have you made wishes that were fulfilled in ways you did not expect?”