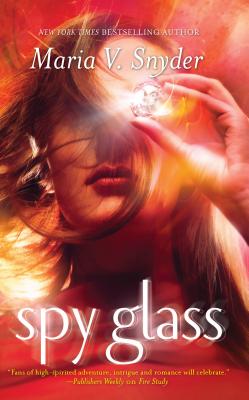 After siphoning her own blood magic in the showdown at Hubal, Opal Cowan has lost her powers. She can no longer create glass magic. More, she's immune to the effects of magic. Opal is now an outsider looking in, spying through the glass on those with the powers she once had, powers that make a difference in the world.

Until spying through the glass becomes her new power. Suddenly, the beautiful pieces she makes flash in the presence of magic. And then she discovers that someone has st olen some of her blood--and that finding it might let her regain her powers. Or learn if they're lost forever...

"Snyder's storytelling skills continue to build an involving story line with an engaging and resourceful heroine."

"Filled with Snyder's trademark sarcastic humor, fast-paced action and creepy villainy, Touch of Power is a spellbinding romantic adventure that will leave readers salivating for the next book in the series."

-USA TODAY on Touch of Power

"This is one of those rare books that will keep readers dreaming long after they've read it."

Joshua Corin holds an M.A. in English and an M.A. in theatre from Binghamton University. His first novel, Nuclear Winter Wonderland, was named one of the top ten debut crime novels of 2008. He currently teaches college in Atlanta, Georgia.
or support indie stores by buying on
(This book is on backorder)