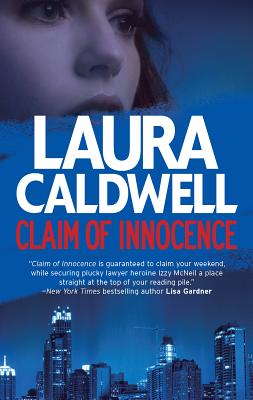 Forbidden relationships are the most tempting. And the most dangerous. It was a crime of passion--or so the police say. Valerie Solara has been charged with poisoning her best friend. The prosecution claims she's always been secretly attracted to Amanda's husband...and with Amanda gone, she planned to make her move. Attorney Izzy McNeil left the legal world a year ago, but a friend's request pulls her into the murder trial. Izzy knows how passion can turn your life upside down. She thought she had it once with her ex-fianc , Sam. Now she wonders if that's all she has in common with her criminally gorgeous younger boyfriend, Theo. It's Izzy's job to present the facts that will exonerate her client--whether or not she's innocent. But when she suspects Valerie is hiding something, she begins investigating--and uncovers a web of secret passions and dark motives, where seemingly innocent relationships can prove poisonous...

Praise For Claim of Innocence…

"A sizzling roller coaster ride through the streets of Chicago, filled with murder, mystery, sex and heartbreak. These page-turners will have you breathless and panting for more."

"Chock full of suspense, Red, White, & Dead is a riveting mystery of crime, love, and adventure at its best."

"Smart dialogue, captivating images, realistic settings and sexy characters...The pieces of the puzzle come together to reveal the secrets between the sheets that lead Izzy to realize who the killer is."

"Red Blooded Murder aims for the sweet spot between tough and tender, between thrills and thought-and hits the bull's-eye. A terrific novel."

"Izzy is the whole package: feminine and sexy, but also smart, tough and resourceful. She's no damsel-in-distress from a tawdry bodice ripper; she's more than a fitting match for any bad guys foolish enough to take her on."

"Told mainly from the heroine's first-person point of view, this beautifully crafted and tightly written story is a fabulous read. It's very difficult to put down-and the ending is terrific."

"Former trial lawyer Caldwell launches a mystery series that weaves the emotional appeal of her chick-lit titles with the blinding speed of her thrillers... Readers will be left looking forward to another heart-pounding ride on Izzy's silver Vespa."

"Chicago author Laura Caldwell will quench your thirst for mystery and suspense this summer with the release of her new trilogy. Red Hot Lies, Red Blooded Murder and Red, White & Dead follow the sexy, red-headed attorney Izzy McNeil as she attempts to uncover murder and lies. Luckily, she works well under pressure and she begins to push past not only the authorities, but her own limits.- Today's Chicago Woman on Red White and Dead