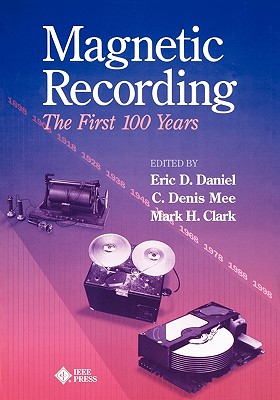 "The first magnetic recording device was demonstrated and patentedby the Danish inventor Valdemar Poulsen in 1898. Poulsen made amagnetic recording of his voice on a length of piano wire. MAGNETICRECORDING traces the development of the watershed products and thetechnical breakthroughs in magnetic recording that took placeduring the century from Paulsen's experiment to today's ubiquitousaudio, video, and data recording technologies including taperecorders, video cassette recorders, and computer harddrives. An international author team brings a unique perspective, drawnfrom professional experience, to the history of magnetic recordingapplications. Their key insights shed light on how magneticrecording triumphed over all competing technologies andrevolutionized the music, radio, television and computerindustries. They also show how these developments offeropportunities for applications in the future. MAGNETIC RECORDING features 116 illustrations, including 92photographs of historic magnetic recording machines and theirinventors." Sponsored by:
IEEE Magnetics Society.

About the Editors Eric D. Daniel has worked in magnetic recordingsince 1947. He worked ten years with the BBC Research Department, three years at the National Bureau of Standards, two years atAmpex, and twenty years at Memorex. As Director of Research atMemorex, Mr. Daniel worked on a wide variety of magnetic recordingmedia, including computer, instrumentation, video and audio tapeproducts, and rigid and flexible disks. In 1979 he was elected as aFellow of Memorex, and in 1982 he retired from full-timeemployment. Denis Mee worked on audio recording for five years at CBSLaboratories. He then worked thirty years at IBM where hespecialized in advanced storage technologies, includingmagneto-optical storage, magnetic recording heads, media, andrecording subsystems for computer rigid disks. In 1983 he waselected as an IBM Fellow, and in 1993 he retired from IBM. Dr. Meecontinues to represent a consortium of companies supporting storageresearch at various universities. Mark H. Clark is Assistant Professor of History in the Humanitiesand Social Sciences Department at Oregon Institute of Technology.An authority on the early history of audio magnetic recording, Dr.Clark spent the summer of 1996 as a Fulbright Professor at theUniversity of Aarhus, Denmark where he researched the life ofValdemar Poulsen.
or
Buy Here
Copyright © 2020 American Booksellers Association