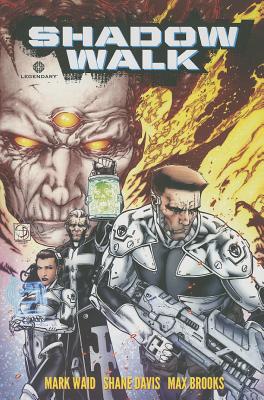 I Walk Through The Valley Of The Shadow of Death... Is the Shadow of Death a metaphor or could it actually be a real place? Three separate paranormal incidents over the last century, in a valley near modern day Iraq, seem to give credence to these claims. But when satellite photos taken over the area hint at a dangerous new energy source, the U.S. decides to send in a Special-Ops team to locate and extract it before it can fall into enemy hands. Led by John Raines, a deadly soldier who has been rotting in Guantanamo accused of allegedly killing his entire platoon after entering the very same Valley years prior, they head into dangerous territory to battle a roster of demonic creatures with little chance of survival. Armed with with two arcane artifacts as their guide and protector - they will find out once and for all if the road to Hell has just opened up on Earth. Written by Mark Waid (Daredevil, Kingdom Come) from a story by Waid, Max Brooks (World War Z) and Legendary producer, Thomas Tull, this high-quality graphic novel is designed and penciled by Shane Davis (Superman: Earth One), inked by Mark Morales (Siege) and colored by Morry Hollowell. (Wolve rine: Old Man Logan)