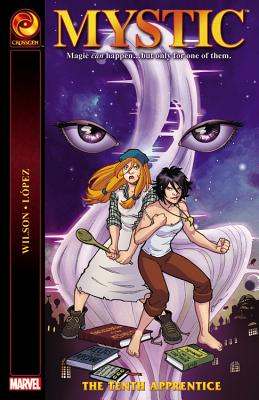 A Crossgen title reimagined as only Marvel could! Eisner Award-nominated G. WILLOW WILSON (Air, Superman, Cairo) and superstar DAVID LOPEZ (HAWKEYE/MOCKINGBIRD, Catwoman) join forces to bring you the story of two seemingly ordinary orphan girls who find their lives turned upside down by magic. One of them will find herself responsible for saving the world...and the other will become her mortal enemy!COLLECTING: Mystic (2011) 1-4

G. Willow Wilson is an American author and essayist who divides her time between Egypt and the US. Her articles about modern religion and the Middle East have appeared in publications including the Atlantic Monthly, the New York Times Magazine and the Canada National Post. She is currently writing Air, an ongoing series for DC's literary imprint, Vertigo, and has written Cairo, an original graphic novel by Vertigo, as well as Vixen: Return of the Lion, a DC miniseries. This is her first Marvel work. She currently lives in Seattle, WA.

He is best known for co-creating and illustrating the first volume of the monthly series Fallen Angel, which was co-created by writer PeteR David, and published by DC Comics, as well as his work with Jim McCann on Marvel's Hawkeye series. He lives in Barcelona, Spain
Loading...
or
Not Currently Available for Direct Purchase