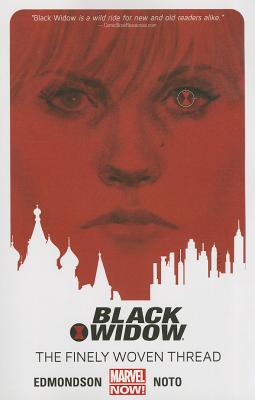 You've seen Black Widow as an Avenger and even an agent of S.H.I.E.L.D. But on her own time she searches for atonement for her past as a KGB assassin - in ways of which those teams just wouldn't approve. The Black Widow goes undercover in Russia, but from its cold streets, the Hand of God reaches out to crush her...and it is as merciless as its name implies. Outmatched by the brute force of a powerful new villain, Natasha faces her deadliest test, and discovers a deadly plot unfolding that spans the entire globe. From the Marvel Universe's darkest corners, Nathan Edmonson (Who is Jake Ellis?) and Phil Noto (Thunderbolts, X-23) bring you a new series as gorgeous and mysterious as Natasha Romanov herself! COLLECTING: Black Widow 1-6, All-New Marvel Now! Point One

Nathan Edmondson is an American fiction author whose work includes the titles Olympus, The Light and Who Is Jake Ellis?, all three of which are published by Image Comics. He also contributed to the Image Comics anthology publication Popgun. A native of Augusta, GA, he worked previously in Washington, DC before moving back to Georgia to write.Nathan has written Ultimate Iron Man, Ultimate X-Men and Avengers vs. X-Men: Animal Cruelty for Marvel Comics as well as Adventures of Superman: Infant in Arms for DC Comics.