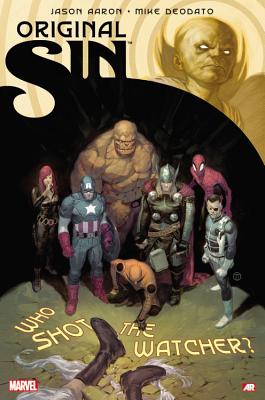 By Marvel Comics (Text by)

Who shot the Watcher? Uatu, the mysterious space-god who's been watching mankind from the moon for as long as we can remember...is dead. Thus begins the greatest murder mystery in Marvel history! As Nick Fury leads the heroes of the Marvel Universe in an investigati on, other forces are marshaling and other questi ons are arising. Why is Black Panther gathering a secret team of his own, including Emma Frost, the Punisher and Dr. Strange? Who is the Unseen? What was stolen from the Watcher's lair? Fury's cosmic manhunt leads to the far corners of the universe and beyond, but just when the Avengers think they've cornered their murderer...everything explodes, unleashing the Marvel Universe's greatest secrets and rocking the heroes to their core! What did the Watcher see? What was the Original Sin?

Jason Aaron is an American comic book writer, known for his work on titles such as The Other Side, Scalped, Ghost Rider, Wolverine and PunisherMAX
or
Not Currently Available for Direct Purchase
Copyright © 2020 American Booksellers Association