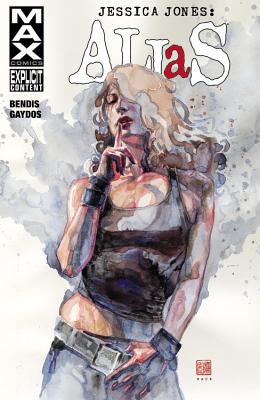 As a costumed adventurer, Jessica Jones was plagued by a lack of self-esteem and an inability to master her superhuman powers. Eventually she realized that she would forever be considered a second-rate super hero, and hung up her cape and tights. Now a tough-as-nails private investigator, Jessica returns home to fi nd a mysterious girl in a costume hiding in her apartment, but the girl fl ies away before Jessica can fi nd out who she is. Through sources, Jessica discovers that her intruder is Mattie Franklin, a.k.a. Spider-Woman, a teenage super hero with a connection to Daily Bugle publisher J. Jonah Jameson. COLLECTING: ALIAS 10, 16-21

Brian Michael Bendis is an American comic book writer and former artist. He has won critical acclaim, including five Eisner Awards for both his creator-owned work and his work on various Marvel Comics books.

Starting out with crime and noir comics, Bendis eventually moved to mainstream superhero work. With Bill Jemas and Mark Millar, Bendis was the primary architect of the Ultimate Marvel Universe, launching Ultimate Spider-Man in 2000, on which he continues as writer to the present day. He relaunched the Avengers franchise with New Avengers in 2004, and has also written the Marvel "event" storylines "Secret War" (2004), "House of M" (2005), "Secret Invasion" (2008), "Siege" (2010) and "Age of Ultron" (2013).

In addition to writing comics, he has also worked in television, video games and film, and taught writing at Portland State University. He will begin teaching at University of Oregon starting in Fall 2013, and his book Words for Pictures will be out in Spring 2014 from Random House
Loading...
or
Not Currently Available for Direct Purchase