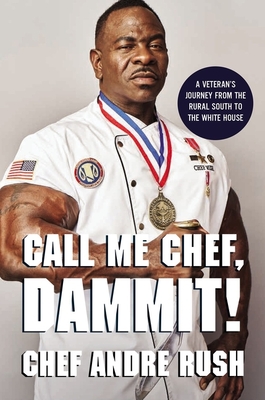 A Veteran's Journey from the Rural South to the White House

What does it take to go from growing up in a Mississippi housing project to becoming a master sergeant and a celebrity chef serving in the White House under four United States presidents?

Call Me Chef, Dammit is the inspiring story of Andre Rush, who became an overnight sensation in 2018, after a photograph of his now-famous twenty-four-inch biceps went viral. However, his journey to that moment could never be captured in a fleeting moment.

From his childhood working on a farm, to his developing into a gifted athlete and artist to his joining the Army, Rush has dedicated his life to serving others. During his twenty-four-year military career, his reputation as an award-winning cook eventually led him to the Pentagon. His presence in the building when the plane struck on 9/11/2001 led to his suffering from PTSD, and he has become an outspoken advocate for the military and especially for wounded warriors.

Every step of the way, Chef Rush has overcome tremendous obstacles, including battling stereotypes and racism. And in this memoir, he shares not only his wounds and what he experienced along the road to recovery but also the optimism, hope, and hard-earned wisdom that have encouraged countless others.