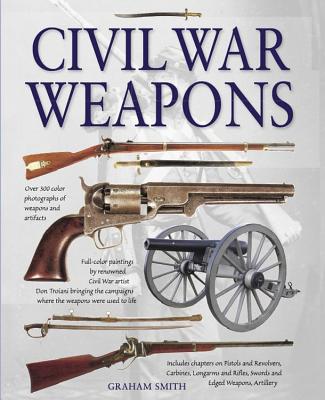 War is a driver for technological change, and the evolution of weapons can be seen by studying the design of the Civil War weapons cataloged in this attractive full-color reference book. The Civil War was fought all over the United States, although mainly in the south. More than three million Americans fought in the Civil War and over six hundred thousand men, or two percent of the population, died in this deradful conflict.

Studying the weapons used by both the Union army and Confderate forces tells an intriguing story of its own. The well-equipped Union army had access to the best of the industrial North's manufacturing output. By contrast, the South had to get by with imported arms and locally made copies of patented weapons. But whatever side he fought for, and whether the soldier wielded a saber, a smoothbore musket, a multi-shot revolver, a canon, or a repeating rifle, in the end was the courage and determination of the fighting man that really counted.

Civil War Weapons showcases studio photographs of the weapons used to fight the war between the states, along with illustrations and beautiful color paintings. The book details the pistols, revolvers, carbines, rifles, longarms, artillery, swords and edged weapons used in the conflict, and reveals fascinating stories and facts about each type of weapon and the men who used them in the Civil War.

Graham Smith is a writer and editor who has worked in senior positions in a number of specialist publishers. He has written and edited many books on military technology and history, including: Civil War Weapons, The World's Great Small Arms; HMS Endurance; The Illustrated Directory of Guns and many others. He also served for over 15 years as a military reservist in both infantry and intelligence roles.
Loading...
or
Not Currently Available for Direct Purchase