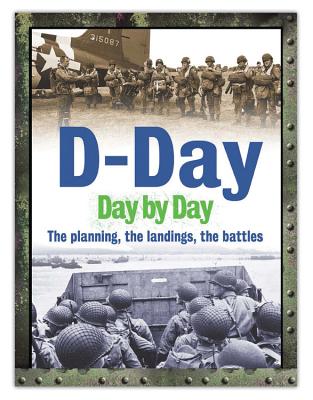 The Planning, the Landings, the Battles

The hardcover reference titles in the Day by Day series examine the evolution of conflicts and wars in a chronological timeline, from the first skirmish to the last battle and everything in between. These books are a historical companion to each major war in the nineteenth and twentieth century. The fate of soldiers, battalions, armies, can change in the blink of an eye with this comprehensive book readers can follow the conflicting sides in their strategy, weaponry, and policies.

"D-Day: Day by Day" is a chronological approach to the operation, allowing the reader to see at a glance the preparations made for the invasion of Normandy, as well as the key actions on the beaches and further inland. While the major actions dominate the text, eyewitness accounts and other stories are used to highlight actions of individual bravery and courage that, although they may not have been defining moments in the invasion, were an integral part of the overall effort, and provide an excellent guide to the human sacrifices made in order to achieve final victory.

In addition to the blow-by-blow account of the action during these crucial days, the book features boxes on all the key personalities involved, including Eisenhower and Montgomery. There are also descriptions of the decisive weapons used by both the Allies and the Germans, and the key actions that were pivotal in the early days of the invasion.

Anthony Hall is a writer and editor who specializes in military history and biography. His work on World War II includes articles on the Burma Campaign, the Second Front Debate, and David StirlingAEs SAS. This is his third book on D-Day and the Normandy Landings. He currently lives in England."
Loading...
or
Not Currently Available for Direct Purchase