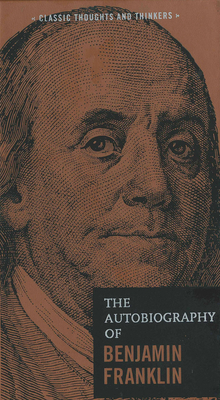 The Autobiography of Benjamin Franklin (Classic Thoughts and Thinkers #2)

The first publication of The Autobiography of Benjamin Franklin, Part One, was published in Paris, in French in 1791. It wasn't until 1818 that the full version of Franklin’s autobiography was published by his grandson, William Temple Franklin, who did not include Part Four because he has previously traded away the original holograph of the Autobiography for a copy that contained only the first three parts. In addition, Franklin’s grandson felt free to make stylistic revisions to his grandfather’s autobiography. W.T. Franklin's text was the standard version of the Autobiography for half a century, until John Bigelow purchased the original manuscript in France and in 1868 published the most reliable text that had yet appeared, including the first English publication of Part Four.

This edition of Autobiography of Ben Franklin comes from the original manuscript of Ben Franklin’s Memoirs and is presented in its entirety for enjoyment by all English speakers.

In the series Classic Thoughts and Thinkers, explore some of the most influential texts of our time along with the inner workings of its greatest thinkers. With works from great American figures such as Theodore Roosevelt and Emily Dickinson and seminal documents including the Constitution of the Unites States, this series focuses on the most reflective and thought-provoking writings of the last two centuries. These beautiful hardcovers are the perfect historical perspective for meeting the challenges of the modern world.
​
Other titles in this series include: As a Man Thinketh, Collected Poems of Robert Frost, Common Sense, Constitution of the United States with the Declaration of Independence, Helen Keller, Narrative of the Life of Frederick Douglass, Selected Poems of Emily Dickinson, and Theodore Roosevelt’s Words of Wit and Wisdom.

Benjamin Franklin was a man of many talents. He kept himself busy with careers ranging from author, printer, political theorist, politician, freemason, postmaster, scientist, inventor, civic activist, statesman, and diplomat. As a scientist, he was known for his invention of bifocals and the Franklin Stove, which was so efficient that it is still made today. As a printer, he wrote for, edited and published the Pennsylvania Chronicle, Pennsylvania Gazette, and Poor Richard's Almanac with his two other partners. Most renowned for his part in the American Revolution, Benjamin Franklin was dubbed 'The First American,' and was part of the United States of America throughout its birth.