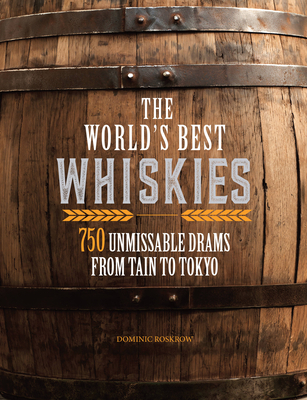 750 Unmissable Drams from Tain to Tokyo

Aimed at beginners as well as connoisseurs, this revised and expanded edition of The World's Best Whiskies encompasses everything you need to know to increase your appreciation of this complex and fascinating spirit.

, such as Lagavulin, Highland Park, and Glenrothes in Scotland, are fully explored alongside the bourbon innovators of Kentucky, such as Woodford Reserve and Maker’s Mark.

Since the publication of the first edition in 2010, many changes have occurred in the world of whisky, all of which are fully explored in this completely new edition. Over 200 of the 750 whiskies are updated, along with over 20 of the 38 features to reflect the ‘new world of whisky,’ from the growing US single malt craft distillery movement (including Balcones in Texas), Japan (Yoichi),Taiwan (Kavalan), India (Paul John), Australia (Overeem), France (Warengem), and Sweden (Mackmyra, Spirit of Hven).

Whisky is one of the world’s most revered spirits, with connoisseurs spending a great deal of money and time on the appreciation of rare expressions and limited edition bottles. In addition, many whisky connoisseurs travel direct to the source to see and experience the world’s best distilleries at first hand.

From global brands to tiny craft distillers, this book offers a comprehensive overview of the best dram the world over.

Dominic Roskrow is the former editor of Whisky Magazine, The Spirits Business, and Whiskeria. He has written eight books on whisky including The World’s Best Whiskies, 1001 Whiskies To Try Before You Die, and The Whisky Opus, and has contributed to several more, including every edition of The Whisky Yearbook. He specializes in world whisky, and he has had work published in newspapers and magazines across the world including Drinks International, Harpers Wine & Spirits Trade News, Whisky Advocate, The Times, The Sunday Times, the Daily Telegraph, and the Wall Street Journal. He has been made a Kentucky Colonel and a Keeper of The Quaich for his contributions to bourbon and Scotch whisky respectively, and he was named the 2015 Fortnum & Mason Drinks Writer of the Year.