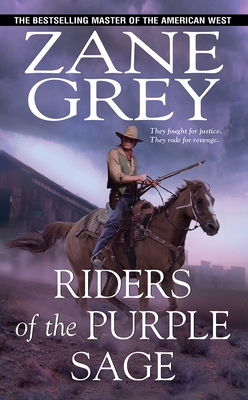 Riders of the Purple Sage

Riders Of The Purple Sage

Cottonwoods, Utah. 1871. A woman stands accused. A man, sentenced to whipping. Into this travesty of small-town justice rides the one man the town elders fear. His name is Lassiter, a notorious gunman who's come to avenge his sister's death. It doesn't take Lassiter long to see that this once-peaceful Mormon community is controlled by the corrupt Deacon Tull--a powerful elder who's trying to take the woman's land by forcing her to marry him, branding her foreman as a dangerous "outsider." Lassiter vows to help them. But when the ranch is attacked by horse thieves, cattle rustlers, and a mysterious Masked Rider, he realizes they're up against something bigger, and more brutal, than the land itself. . .

In this battle, no man rides alone.

"Zane Grey epitomized the mythical West that should have been. . . the standout among them is Riders of the Purple Sage." --True West

"Grey was a champion of the American wilderness and the men and women who tamed the Old West." --Booklist

Zane Grey is noted for his careful research and accurate portrayal of the American West. Grey’s first book was published in 1904, and he went on to write more than 50 novels, most of them tales of adventure with a Western setting, including The Last of the Plainsmen (1908), Riders of the Purple Sage (1912), The Thundering Herd (1925), Code of the West (1934), and West of the Pecos (1937). His nonfiction works includeTales of Fishing (1925). Many of Grey's novels continue to be extremely popular, and several have been adapted into motion pictures.
Loading...
or
Not Currently Available for Direct Purchase