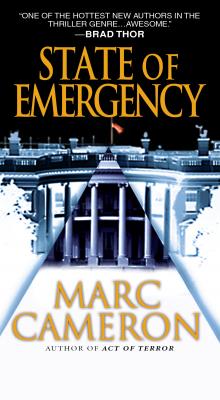 Two agents, Russian and American, are brutally murdered. College students, working as drug mules, die gruesome deaths from radiation poisoning. Powerful dirty bombs explode minutes apart in San Francisco and St. Petersburg, Russia--slaughtering citizens and spreading blind panic throughout the world. But this is only a warning. The next attack will be nuclear.

Enter Air Force OSI agent Jericho Quinn and his crack team of specialists. Their mission: track down the black-market arms dealer who masterminded the plot--with a Soviet-era, suitcase-sized bomb--and dismantle them both. When the trail leads to South America, Quinn has to join the famous Dakar Rally, a 6,000-mile motorcycle run that's about to become the most dangerous race in history. It's not the finish line they're racing for. It's the fate of the world. . .

"One of the hottest new authors in the thriller genre. . .Awesome." --Brad Thor

A native of Texas, Marc Cameron has spent over twenty-nine years in law enforcement. His assignments have taken him from rural Alaska to Manhattan, from Canada to Mexico and points in between. A second degree black belt in jujitsu, he often teaches defensive tactics to other law enforcement agencies and civilian groups. Cameron presently lives in Alaska with his wife and his BMW motorcycle.
Loading...
or
Not Currently Available for Direct Purchase