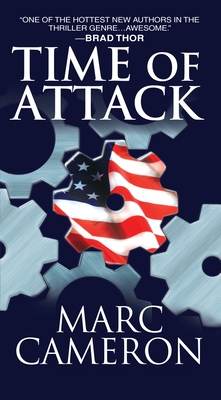 "One of the hottest new authors in the thriller genre. . .Awesome." --Brad Thor

In a small town in Utah, people are contracting a horrific disease with alarming plague-like symptoms. The CDC quarantines the area but outbreaks are already being reported in China, Japan, and England. Evidence suggests this is not a new strain of superbug--but an act of war, an orchestrated deployment of unstoppable terror. . .

Special agent Jericho Quinn, hellbent on finding the sniper who attacked his family, steps into an even bigger, and deadlier, conspiracy: a secret cabal of elite assassins embedded throughout the globe. Infecting the very fabric of the free world. Exterminating targets with cold, silent precision. For Quinn, it's as insidious as the virus that claims new victims each day--and he plans to wipe it off the face of the earth. . .

A native of Texas, Marc Cameron has spent over twenty-nine years in law enforcement. His assignments have taken him from rural Alaska to Manhattan, from Canada to Mexico and points in between. A second degree black belt in jujitsu, he often teaches defensive tactics to other law enforcement agencies and civilian groups. Cameron presently lives in Alaska with his wife and his BMW motorcycle.
Loading...
or
Not Currently Available for Direct Purchase