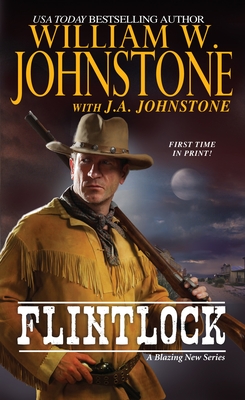 The Greatest Western Writer Of The 21st Century

He is brave, tough as leather, and has left behind a trail of deadly enemies--outlaws he's hunted down or killed with the cold heart of a man used to violence. A feared bounty hunter and the scourge of bad men everywhere, Flintlock carries an ancient Hawken muzzle-loader, handed down to him from the mountain man who raised him. He stands as the towering hero of a new Johnstone saga.

Busted out of prison by an outlaw friend, Flintlock joins a hunt for a fortune--a golden bell hanging in a remote monastery. But between the smoldering ruin of his former jail cell and a treasure in the Arizona mountains there will be blood at a U.S. Army fort, a horrifying brush with Apache warriors, and a dozen bloody showdowns with the schemers, shootists, madmen, and lost women who find their way to Flintlock's side. From a vicious, superstitious half-breed to the great Geronimo himself, Flintlock meets the frontier's most murderous hardcases--many who he must find a way to kill. . .

“Every day with Bill was an adventure story in itself. Bill taught me all he could about the art of storytelling. ‘Keep the historical facts accurate,’ he would say. ‘Remember the readers, and as your grandfather once told me, I am telling you now: be the best J.A. Johnstone you can be.’”
Loading...
or
Not Currently Available for Direct Purchase