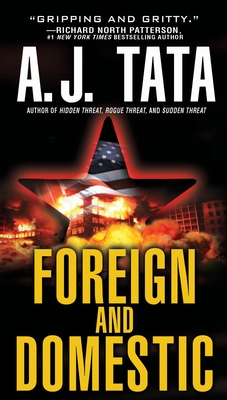 One year ago, Captain Jake Mahegan led a Delta Force team into Afghanistan to capture an American traitor working for the Taliban. The mission ended in tragedy. The team was infiltrated and decimated by a bomb. An enemy prisoner was killed. Mahegan was dismissed from service—dishonored forever. Now, haunted by the incident, Mahegan is determined to clear his name. The military wants him to stand down. But when the American Taliban returns to domestic soil—headed by the traitor who ruined his life—Mahegan is the only man who knows how to stop him. Outside the law. Under the radar. Out for vengeance…

Brigadier General Tata donates a portion of his earnings to the USO Metro DC, the North Carolina Heroes Fund,  and the Michael Murphy Foundation.

Praise For Foreign and Domestic (A Jake Mahegan Thriller #1)…

Brigadier General Anthony J. Tata, U.S. Army (Retired), commanded combat units in the 82nd and 101st Airborne Divisions and the 10th Mountain Division. His last combat tour was in Afghanistan in 2007 where he earned the Combat Action Badge and Bronze Star Medal. He is the author of three critically acclaimed novels, Sudden Threat, Rogue Threat, and Hidden Threat. He has been a frequent foreign policy guest commentator on Fox News, CBS News, and The Daily Buzz. NBC’s Today Show featured General Tata’s career transition from the army to education leadership where he has served as the Chief Operations Officer of Washington, DC Public Schools for firebrand Chancellor Michelle Rhee and as the Superintendent of the 16th largest school district in the nation in Wake County/Raleigh, NC.

Brigadier General Tata donates a portion of his earnings to the USO Metro DC, the North Carolina Heroes Fund,  and the Michael Murphy Foundation.
Loading...
or
Not Currently Available for Direct Purchase