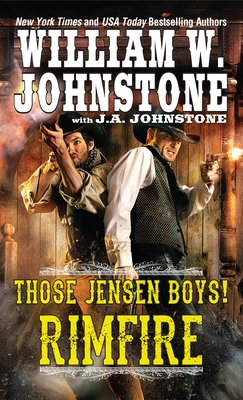 Smoke Jensen was a towering Western hero. Now his two freewheeling, long-lost nephews, Ace and Chance Jensen, are blazing a legendary trail of their own…

Riverboat gambling is a blast, until hot-headed Chance finds out just what he won in his final hand against a Missouri River gambler named Haggarty. Chance's "prize" is a beautiful Chinese slave girl named Ling. The twins want to set Ling free and keep their cash, but at Fort Benton, Ling gives them the slip, robbing them blind. When they hunt her down in Rimfire, Montana, she's with Haggarty, lining up their next mark.

What Would Smoke Jensen Do?

Ace and Chance want payback. So does hardcase Leo Belmont, who's come all the way from San Francisco with a grudge and a couple of kill-crazy hired guns. Belmont wants revenge, and Ace and Chance are in the way.

Soon the boys are fighting alongside Ling and Haggarty. Because it doesn't matter now who's right and who's wrong--blazing guns and flying lead are laying down the law…

William W. Johnstone is the USA Today and New York Times bestselling author of over 220 books, including The First Mountain Man, The Last Mountain Man, Maccallister, Eagles, , Savage Texas, Matt Jensen, The Last Mountain Man; The Family Jensen, and The Kerrigans: A Texas Dynasty , and the stand-alone thrillers Suicide Mission, , The Bleeding Edge, Home Invasion, Stand Your Ground, and Tyranny. Visit his website at www.williamjohnstone.net or by email at dogcia2006@aol.com.

"Every day with Bill was an adventure story in itself. Bill taught me all he could about the art of storytelling. 'Keep the historical facts accurate,'  he would say. 'Remember the readers, and as your grandfather once told me, I am telling you now: be the best J.A. Johnstone you can be.'"
Loading...
or support indie stores by buying on
(This book is on backorder)