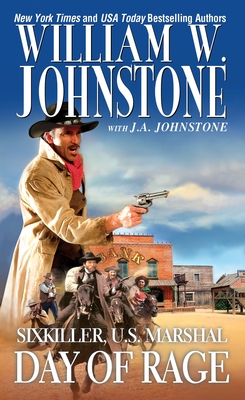 Into a lawless town rode a hero named John Henry Sixkiller. Only William W. Johnstone with J. A. Johnstone could tell a tale of violence and vengeance so real, so raw, it outdoes the legends of Old West justice that inspired it.

On The American Frontier, History Is Written By Bullets

It was there for the taking: $75,000 in gold bullion, the combined payrolls of three productive gold mines, just waiting to be stolen from under the noses of a bickering sheriff and city marshal. Billy Ray Gilmore and his band of kill-crazy outlaws have a plan to do it, too--that is, until Sixkiller comes to town. Hiding his badge to conceal his identity as a U.S. marshal, Sixkiller goes undercover to smoke out the culprits before they strike. But in this town full of two-legged rattlesnakes, deadly surprises lurk behind every saloon door. To keep from being bitten, Sixkiller will have to lay a few traps of his own. Lucky for him, what this town lacks in law, it makes up for in guns--and dynamite.

William W. Johnstone is the USA Today and New York Times bestselling author of over 220 books, including Preacher, The Last Mountain Man, Maccallister, Eagles, A Town Called Fury, Savage Texas, Matt Jensen, The Last Mountain Man; The Family Jensen, Flintlock, and Those Jensen Boys! and the stand-alone thrillers Vengeance is Mine, Invasion USA, Border War, Remember the Alamo, The Blood of Patriots, Home Invasion, Tyranny and the upcoming Black Friday. Visit his website at www.williamjohnstone.net or by email at dogcia2006@aol.com.

"Every day with Bill was an adventure story in itself. Bill taught me all he could about the art of storytelling. 'Keep the historical facts accurate,'  he would say. 'Remember the readers, and as your grandfather once told me, I am telling you now: be the best J.A. Johnstone you can be.'"
Loading...
or
Not Currently Available for Direct Purchase