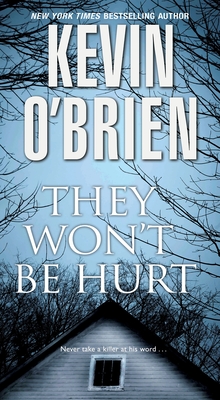 They Won't Be Hurt

ONCE YOU LET THEM IN
The lights are on at the Singleton vacation home on Lopez Island, Washington, illuminating the horror within. Scott Singleton, former NFL star turned television evangelist, lies dead. The bodies of his wife and four of their five children are found on the second floor, bound, gagged, and stabbed repeatedly. The oldest daughter was shot downstairs. And the police’s main suspect—the property caretaker—has disappeared.

THEY WILL NEVER
In her secluded vineyard home two hours away, Laura Gretchell is on edge. Her husband is out of town on business, and the children are understandably shaken. Laura tries to tell herself there’s no reason to fear. Then the door handle rattles, and the real terror begins.

LET YOU GO
They’re in her house, holding her children hostage, and Laura has only one option: do exactly what the intruders say. But as Laura races to find the information they seek, she realizes that the enemies within her own home are only part of the nightmare. Because someone wants to keep the truth hidden at any cost, no matter how many more must die . . .

“The suspense builds from page one and ends with a climax you won’t see coming.”
—Suspense Magazine

Praise For They Won't Be Hurt…

“Terrifying and fast-paced, They Won't Be Hurt is any parent's worst nightmare. Kevin O'Brien (Unspeakable, Killing Spree) has written a thriller that ratchets the tension high. Fans of Karin Slaughter or David Baldacci are sure to find it irresistible.” —SHELF AWARENESS

KEVIN O’BRIEN is the New York Times and USA Today bestselling author of over twenty suspense novels. Before his books landed him on the bestseller lists, he was a railroad inspector who wrote at night. He moved from the train tracks to become a full-time author in 1997 when his novel, Only Son, was picked up by Reader’s Digest and optioned for film. Since then, his books have been translated into fourteen languages. Born and raised in Chicago, O'Brien now lives in Seattle, where he is on the board of Seattle 7 Writers, a collective of bestselling, award-winning authors. He can be found online at KevinOBrienbooks.com/.
Loading...
or support indie stores by buying on