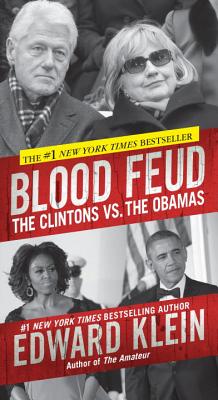 The Clintons vs. The Obamas

On the surface, they are allies, two of the most powerful Democratic families on the political landscape, shaping American policy for years to come. Behind the scenes, they are bitter enemies, rivals fueled by great personal animosity.

#1 New York Times bestselling author Edward Klein unveils the jealousy, hostility, and outright rancor that divide the Clintons and Obamas. Now, as the Clintons attempt to maneuver their way back into the White House, Blood Feud, the bestseller that toppled Hillary Clinton’s Hard Choices from the #1 New York Times slot, sheds new light on the political spectacle to come.
·The secret Hillary Clinton is keeping that could make it impossible for her to be president
·How Barack Obama set up Hillary Clinton to take the blame for the Benghazi debacle
·Why Michelle Obama’s political ambitions could rival Hillary Clinton’s
·How the only White House dinner between the Obamas and the Clintons simmered with tension and contempt
·The true power behind president Obama is not Michelle, but her closest friend…

“The press is not curious about what Klein is saying. They are circling the wagons, trying to defend Hillary.”—Rush Limbaugh on The Truth about Hillary

“A serious political and psychological biography of the most likely next Democratic nominee for president—and thus, quite plausibly I fear, the next president of the United States.”—The Washington Times on The Truth about Hillary

“Absolutely read this book.”—Glenn Beck on The Amateur

Edward Klein is the author of the #1 New York Times bestseller The Amateur. All of his nonfiction books have appeared on The New York Times Bestseller List, including: The Truth about Hillary, Katie: The Real Story, and Ted Kennedy: The Dream that Never Died. For more info, please visit www.EdwardKlein.com.
Loading...
or
Not Currently Available for Direct Purchase