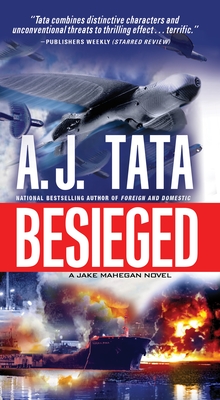 A school under siege. A shooter in the classroom. An all too common American nightmare unleashed again. But this time, former Delta Captain Jake Mahegan happens to be on the schoolgrounds checking in on the daughter of a colleague. Instead he’s staring down a suicidal gunman rigged to blow. During the standoff another attack begins outside the school. The gunman goes down, Mahegan is knocked unconscious, and a twelve-year-old autistic girl is kidnapped. Mahegan knows his mission before the smoke clears, but where it takes him is unimaginable—deep into a widespread conspiracy that threatens the nation’s very core. Treason in the highest halls of government. And only one man is prepared to stop it—or die trying . . .

“Foreign and Domestic is absolutely fantastic . . . pulse‑pounding . . . a brilliant, cutting‑edge plot that will keep you on the edge‑of‑your‑seat until the very last page.”
—New York Times bestselling author Brad Thor

Brigadier General Anthony J. Tata, U.S. Army (Retired), commanded combat units in the 82nd and 101st Airborne Divisions and the 10th Mountain Division. His last combat tour was in Afghanistan in 2007 where he earned the Combat Action Badge and Bronze Star Medal. He is the author of three critically acclaimed novels, Sudden Threat, Rogue Threat, and Hidden Threat. He is a frequent foreign policy guest commentator on Fox News, CNN, CBS News, and The Daily Buzz. NBC’s Today Show featured General Tata’s career transition from the army to education leadership where he has served as the Chief Operations Officer of Washington, DC Public Schools for firebrand Chancellor Michelle Rhee and as the superintendent of the 16th largest school district in the nation in Wake County, Raleigh, NC.