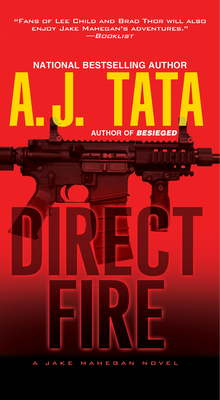 Direct Fire brings the war on terror to America.

A powerful banker, gunned down in cold blood. A military family, senselessly slaughtered as they sleep. A key general, kidnapped from his farm near Fort Bragg. Atrocities like these are all too common in the Middle East. But this is the United States of America . . .

Time is running out for Jake Mahegan. Terrorist cells are gathering in the Blue Ridge Mountains. Hackers are emptying the nation’s banks. And their final act of vengeance will bring the whole world to its knees. For Mahegan, it’s time to kill. Now.

“Horrific at times, spine-tingling throughout, A.J. Tata once again proves capable of writing a firestorm that’s even scarier because it is all too real. “
—Suspense Magazine on Besieged

Brigadier General Anthony J. Tata, U.S. Army (Retired), commanded combat units in the 82nd and 101st Airborne Divisions and the 10th Mountain Division. His last combat tour was in Afghanistan in 2007 where he earned the Combat Action Badge and Bronze Star Medal. He is the author of three critically acclaimed novels, Sudden Threat, Rogue Threat, and Hidden Threat. He is a frequent foreign policy guest commentator on Fox News, CNN, CBS News, and The Daily Buzz. NBC’s Today Show featured General Tata’s career transition from the army to education leadership where he has served as the Chief Operations Officer of Washington, DC Public Schools for firebrand Chancellor Michelle Rhee and as the superintendent of the 16th largest school district in the nation in Wake County, Raleigh, NC.
Loading...
or
Not Currently Available for Direct Purchase