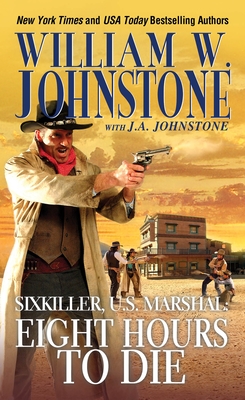 William W. Johnstone, the beloved, bestselling frontier chronicler, brings to life the story based on the historical lawman born and bred in Cherokee Nation: Sixkiller. In the wild, wild west there is no man more dangerous—on either side of the law.

The territorial governor has sent three lawmen to clean up the mess that is Chico, New Mexico—and not one of those lawmen has made it out alive. A crooked sheriff has the terrified denizens of Chico under his boot heel, so the governor turns to John Henry Sixkiller, sending him undercover as a gunman for hire. So far, Sixkiller has bloodied his opponents in every battle he’s fought in the Southwest. But this one could affect the entire country: A group of merciless land pirates have been hiding behind Chico’s brutal sheriff. Their goal: to take the entire territory hostage and sell it lock, stock and barrel to Mexico—gleefully slaughtering anyone who gets in the way...

William W. Johnstone is the USA Today and New York Times bestselling author of over 220 books, including PREACHER, , THE LAST MOUNTAIN MAN, BLOOD BOND, EAGLES, A TOWN CALLED FURY, SAVAGE TEXAS, MATT JENSEN, THE LAST MOUNTAIN MAN; THE FAMILY JENSEN, SIDEWINDERS, and the upcoming BUTCH CASSIDY: THE EARLY YEARS. His thrillers include Phoenix Rising, Jackknife, Home Invasion, The Blood of Patriots, and The Bleeding Edge.  Visit his website at www.williamjohnstone.net or by email at dogcia2006@aol.com.

Being the all around assistant, typist, researcher, and fact checker to one of the most popular western authors of all time, J.A. Johnstone learned from the master, Uncle William W. Johnstone.
He began tutoring J.A. at an early age. After-school hours were often spent retyping manuscripts or researching his massive American Western History library as well as the more modern wars and conflicts. J.A. worked hard—and learned.

“Every day with Bill was an adventure story in itself. Bill taught me all he could about the art of storytelling. ‘Keep the historical facts accurate,’  he would say. ‘Remember the readers, and as your grandfather once told me, I am telling you now: be the best J.A. Johnstone you can be.’”
Loading...
or
Not Currently Available for Direct Purchase