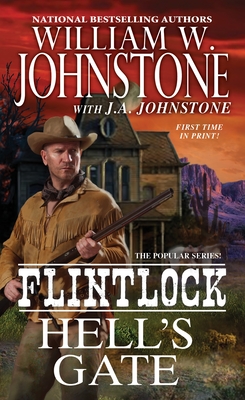 Raised in the wild. Armed to the teeth. Sam Flintlock is no ordinary bounty hunter. But sometimes even a man who sets traps for a living can step right into one. Sometimes the hunter becomes the hunted—in the ultimate kill-or-be-killed showdown from bestselling authors William W. Johnstone and J.A. Johnstone . . .

ONE WEEK IN HELL

After crossing the dry Arizona desert—and missing six meals in a row—Sam Flintlock is flat-out desperate. For food. For work. For lodgings. Luckily he finds all three in the high timber country east of the Mogollon River. A very young and pretty heiress, Lucy Cullen, has an unusual proposition for the bounty hunter. She will pay him cold, hard cash to spend one full week in the gothic mansion of her murdered uncle. What’s the catch? The place is haunted . . .

Flintlock ain’t afraid of the dead. It’s the living he’s more worried about—namely Hogan Forde, the murderous Texas gunslinger who just happens to be skulking around town. Toss in a few unfriendly locals and a missing treasure map, and you’ve got all the makings of a pretty terrifying campfire story. The difference is, these restless spirits are very much among the living, and they’ve got Flintlock slated for his own afterlife . . .

William W. Johnstone is the New York Times and USA Today bestselling author of over 300 books, including the series THE MOUNTAIN MAN; PREACHER, THE FIRST MOUNTAIN MAN; MACCALLISTER; LUKE JENSEN, BOUNTY HUNTER; FLINTLOCK; THOSE JENSEN BOYS; THE FRONTIERSMAN; SAVAGE TEXAS; THE KERRIGANS; and WILL TANNER: DEPUTY U.S. MARSHAL. His thrillers include BLACK FRIDAY, TYRANNY, and STAND YOUR GROUND. Visit his website at www.williamjohnstone.net.

“Every day with Bill was an adventure story in itself. Bill taught me all he could about the art of storytelling. ‘Keep the historical facts accurate,’ he would say. ‘Remember the readers, and as your grandfather once told me, I am telling you now: be the best J.A. Johnstone you can be.”
Loading...
or
Not Currently Available for Direct Purchase