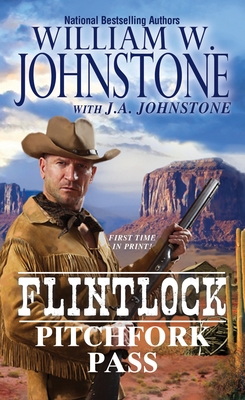 Johnstone Country.  Frontier Spirit Lives Here.
Life is hard on the American frontier. Justice is even harder. But when it comes to revenge, no man can escape the righteous wrath of a wronged bounty hunter. Especially when his name is Flintlock . . .

Flintlock takes no pleasure in killing. But when his pal O’Hara gets bullwhipped by a trio of lowdown prairie rats, Flintlock finds sanctuary for his wounded friend at the cabin of a kindly miner and his lovely daughter. Flintlock heads out to hunt down some food. But there’s more than just deer lurking in these woods. A bloodthirsty band of eight savage raiders—led by a half-mad gunslinger called The Old Man of the Mountain—wage a full-scale attack on the miner’s cabin. By the time Flintlock returns, O’Hara’s been beaten, the miner’s been shot, and the daughter’s been kidnapped . . .

It gets worse. The Old Man plans to make the young beauty his bride. But Flintlock has a plan, too. It’s not just a rescue mission. It’s a vengeance ride—leading to one bloody showdown that’ll go down in history . . .

“Every day with Bill was an adventure story in itself. Bill taught me all he could about the art of storytelling. ‘Keep the historical facts accurate,’ he would say. ‘Remember the readers, and as your grandfather once told me, I am telling you now: be the best J.A. Johnstone you can be.”
Loading...
or
Not Currently Available for Direct Purchase