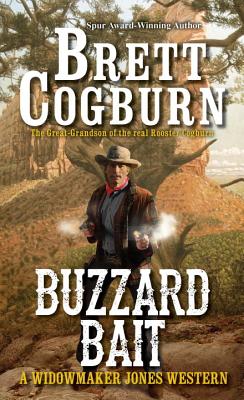 Two-time Spur Award winner Brett Cogburn brings back the true grit and glory of the Old West—with a hero as glorious as the author’s real-life ancestor Rooster Cogburn . . .

THEY CALL HIM THE “WIDOWMAKER”

Newt Jones is none too proud of his deadly nickname. But when you tangle with the likes of Judge Roy Bean and the notorious Mexican outlaw Juan Cortina, a man’s bound to earn a reputation. Or get stuck with a moniker like “Widowmaker.” Even so, Newt is ready to put his gunslinging days behind him, hang up his Winchester, and take it easy. There’s just one problem: Ain’t nothing easy about living in Apache country . . .

When Newt gets word that a renegade tribe has kidnapped Matilda Redding’s grandson, he can’t just sit by and let the local authorities bungle it. Matilda once did him a good turn up on the Pecos and—flat broke and half drunk or not—he’s got to help the old gal out. So he saddles up his horse, straps on his dead man’s gun, and sets off to save this boy before he’s buzzard chow. Sure, Newt’s outnumbered, outgunned, and probably out of his mind. But they don’t call him Widowmaker Jones for nothing . . .

Some folks are just born to tell tall tales. Brett Cogburn was reared in Texas and the mountains of Southeastern Oklahoma. He was fortunate enough for many years to make his living from the back of a horse, where on cold mornings cowboys still straddled frisky broncs and dragged calves to the branding fire on the end of a rope from their saddlehorns. Growing up around ranches, livestock auctions, and backwoods hunting camps filled Brett’s head with stories, and he never forgot a one.  In his own words: “My grandfather taught me to ride a bucking horse, my mother gave me a love of reading, and my father taught me how to hunt my own meat and shoot straight. Cowboys are just as wild as they ever were, and I’ve been damn lucky to have known more than a few.” The West is still teaching him how to write. Brett Cogburn lives in Oklahoma with his family.
or
Not Currently Available for Direct Purchase
Copyright © 2020 American Booksellers Association