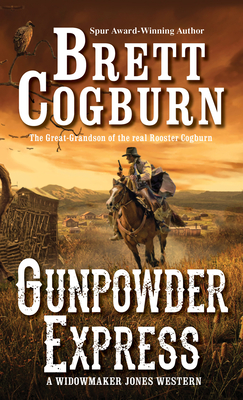 TIME TO MEET THE WIDOWMAKER

Vulture City is home to a prosperous gold mine and every bad man in the Arizona Territory knows it. Nearly every stagecoach attempting to deliver the gold to the railroad at Maricopa has been ambushed on the trail—a trail known as the Gunpowder Express for the bullet-riddled bodies along the way.

With gold piling up and a lack of volunteers to transport it, the mine owner hires Newt “Widowmaker” Jones to ride shotgun on the next stage. Foolhardy and desperate for money, Newt joins three other guards—and a passenger, Jenny Silks, a stubborn firebrand with her own stake in seeing the delivery through. But waiting on the Gunpowder Express is Irish Jack O’Harrigan and his band of outlaws. There’s not a soul alive he wouldn’t think twice about putting six feet under. But he’s never traded lead with the man known as Widowmaker . . .

Some folks are just born to tell tall tales. Brett Cogburn was reared in Texas and the mountains of Southeastern Oklahoma. He was fortunate enough for many years to make his living from the back of a horse, where on cold mornings cowboys still straddled frisky broncs and dragged calves to the branding fire on the end of a rope from their saddlehorns. Growing up around ranches, livestock auctions, and backwoods hunting camps filled Brett’s head with stories, and he never forgot a one.  In his own words: “My grandfather taught me to ride a bucking horse, my mother gave me a love of reading, and my father taught me how to hunt my own meat and shoot straight. Cowboys are just as wild as they ever were, and I’ve been damn lucky to have known more than a few.” The West is still teaching him how to write. Brett Cogburn lives in Oklahoma with his family.
Loading...
or support indie stores by buying on