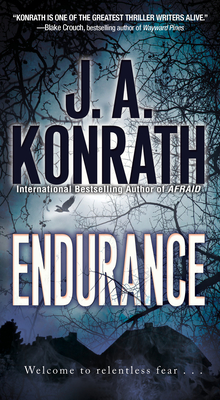 One year ago, a young woman checked into a small bed-and-breakfast in the hills of West Virginia. She was never seen again . . .

Tonight, the Rushmore Inn will host four new guests who bear striking similarities to the woman who disappeared. Like her, they are young and beautiful—Iron Woman athletes arriving for a triathalon. Like her, they were forced to come to this godforsaken place when their hotel overbooked. And like her, they will come face to face with the kind of terror that can kill mere mortals. But this year will be different. This time the women are fighting back . . .

From bestselling author J.A. Konrath comes a rollercoaster of terror and suspense, a nightmarish ride into the depths of madness that tests the very limits of human endurance . . .

Joe Konrath has sold more than two million books in twenty countries. He’s written over thirty novels and over a hundred short stories in the mystery, thriller, horror, and sci-fi genres. He’s twice won the Love is Murder Award for best thriller, and has also won the Derringer Award, and the Ellery Queen Readers Choice Award, and has been nominated for many others including the Anthony, Macavity, and Gumshoe. Konrath edited the collection These Guns for Hire, and his fiction has appeared in dozens of magazines and anthologies including Ellery Queen, Alfred Hitchcock, Cemetery Dance, The Strand, Thriller edited by James Patterson, and Wolfsbane & Mistletoe edited by Charlaine Harris (True Blood). He’s considered a pioneer in self-publishing. His blog, A Newbie’s Guide to Publishing, gets several million hits per year, and Konrath has been featured in Forbes, Entertainment Weekly, Newsweek, Playboy, USA Today, Time, Woman's World, the LA Times, and the New York Times among many other periodicals. He also blogs for the Huffington Post. Find out more at www.jakonrath.com.
Loading...
or
Not Currently Available for Direct Purchase