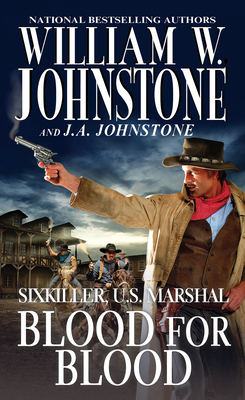 Johnstone Country. Where others fear to tread.

John Henry Sixkiller, a Cherokee U.S. marshal who takes the jobs no one wants to touch, hunts down the most dangerous outlaws and killers infesting the American West.

VENGEANCE WILL BE MINE

Judge Ephraim Doolittle is begging for help. A killer he sent to the gallows has a brother who has sworn vengeance on judge and jury both. John Henry Sixkiller is the perfect man for this job. And he will do it the hard way: getting himself arrested, busting out of jail, and worming his way into an outlaw haven run by a beautiful, amoral woman. Lottie Dalmas, the lover of the late outlaw Henry Garrett, is at the center of the plot for revenge, with stone-cold killers at her beck and call. But someone else is also running the show, a remorseless, brutal outlaw hiding in plain sight and already moving toward his next killing: of John Henry Sixkiller himself . . .

“Every day with Bill was an adventure story in itself. Bill taught me all he could about the art of storytelling. ‘Keep the historical facts accurate,’ he would say. ‘Remember the readers, and as your grandfather once told me, I am telling you now: be the best J.A. Johnstone you can be.’”
Loading...
or support indie stores by buying on
(This book is on backorder)