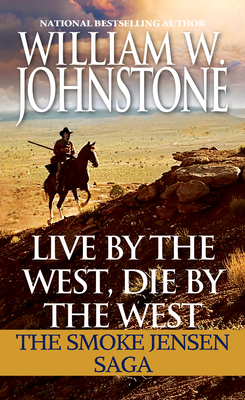 Johnstone Country. Where others fear to tread.

With his bestselling Smoke Jensen series, William W. Johnstone has created a hero whose mountain-man roots, trail-driving grit, and gun-blazing sense of justice embody the frontier spirit of America. Here, in one volume, are two of the Western legend’s most powerful adventures . . .

TRIUMPH OF THE MOUNTAIN MAN
In a land of opportunity, there will be opportunists. But few are as vicious, cruel—or flat-out evil—as Clifton Satterly. This power-hungry robber baron has set his sights on Tua Pueblo, a quiet town in the New Mexico Territory. He plans to seize the timber-rich land through brute force and strip it clean with slave labor. But there’s one thing he didn’t plan on: a one-man wall of resistance named Smoke Jensen . . .

JOURNEY OF THE MOUNTAIN MAN
When it comes to outbursts of violence in the Old West, there’s nothing worse than a range war. They’re fueled by greed, fanned by gunfire, and fated to end in bloodshed, Which is why Smoke Jensen would just as soon keep his distance. But when his cousin Fae is involved, he’s got no choice but to strap on his Colts, team up with four old friends—and get ready for a hundred-gun showdown. This is going to be one hell of a fight . . .