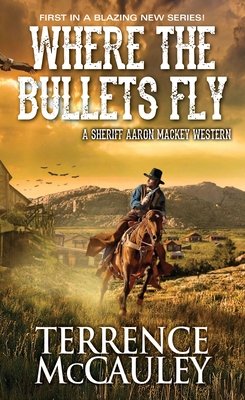 Where the Bullets Fly (A Sheriff Aaron Mackey Western #1)

WINNER OF THE PEACEMAKER AWARD

Surrounded by ranches, farms, and precious metal mines, the town of Dover Station, Montana is ripe for the plucking. It’s up to Sheriff Aaron Mackey to keep the peace—and keep the dregs of humanity from trying to make a killing . . .

WHERE THE BULLETS FLY, VENGEANCE REIGNS

If anyone can smell an investment opportunity, it’s railroad men and big city bankers. They’re not the kind of folks that Sheriff Mackey is used to dealing with. But greed is greed, and if anyone knows how money can drive men to murder, it’s the sheriff of a boomtown like Dover Station. But when Mackey is forced to gun down a pair of saloon rats, it brings a powderkeg of trouble—with a quick-burning fuse of vengeance named Alexander Duramont. This bloodthirsty psychopath wants to kill the sheriff for killing his buddies. And he plans to get his revenge using a highly combustible mix of fire, fear, and dynamite . . .

Mackey’s not sure how he’s going to stop this blood-crazed lunatic.
But it’s going to be one heck of an explosive and very violent showdown . . .

“Hard to put down . . . because of the gritty and stylish  narrative, the virtually nonstop action.”
—Publishers Weekly on Terrence McCauley’s Sympathy for the Devil

“Fans of crime fiction and thrillers know Terrence McCauley as a first-rate storyteller who can handle action scenes while capturing the mood of New York City in the 1930s and today. Turns out, McCauley’s more than a fair hand at Westerns too…Imagine a spaghetti Western with flawed characters and nonstop action. Or Rooster Cogburn, without the eyepatch and a whole lot meaner.”
—Roundup Magazine on Where the Bullets Fly

Terrence P. McCauley is an award-winning writer of crime fiction, thrillers, historical fiction and Westerns. His Western fiction debut, Where the Bullets Fly, received a Western Fictioneers Peacemaker Award and was named Best New Western Paperback of the Year by True West magazine. His short stories have been featured in Thuglit, Spinetingler Magazine, Shotgun Honey, Big Pulp, and other publications. A Spur Award and ITW Award nominee, he is a recipient of the Silver Medal for Historical Fiction from the Military Writers Society of America. He is a member of the New York City chapter of the Mystery Writers of America, the International Thriller Writers, the International Crime Writers Association, and the Montana Historical Society. A proud native of the Bronx, New York, he can be found online on Facebook, Twitter or at TerrencePMcCauley.com.
Loading...
or support indie stores by buying on