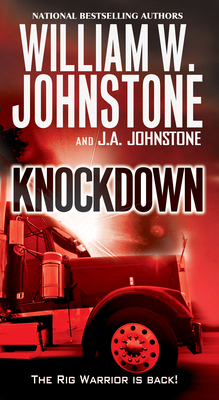 JOHNSTONE COUNTRY. WHERE THE WILL DEFIES FEAR.

A NATION OFF THE RAILS
No one saw the first attack coming. A perfectly orchestrated assault on a mass-transit railroad line that left countless Americans dead. Intelligence experts are convinced this is no ordinary terrorist attack. To pull off something like this, it would take a deep-state traitor with dark foreign connections. And to stop them, it will take someone who isn’t afraid to shed blood.

A HERO OFF THE GRID
Enter Barry Rivers, the Rig Warrior. An urban legend in the intelligence community, Rivers has been living off the radar for years. But when he sees his country under attack, he reaches out to his nephew Jake, an FBI agent, to track down the enemies in our own government. To these high-ranking traitors, Rivers is a threat to their global agenda. When Rivers revs up his tricked-out 18-wheeler and goes after a runaway train on a collision course with disaster, all bets are off. The war is on. And with  Barry Rivers at the wheel, it’s going to be the ultimate knockdown, drag-out fight for America’s future . . .

Though known largely for their westerns, national bestselling authors William W. Johnstone and J.A. Johnstone have written some of the most explosive and timely thrillers of the last decade, with almost one million copies in print. These include the nationally bestselling Tyranny, a ripped-from-the-headlines story of citizens’ rights and government wrongs, and Black Friday, a chilling depiction of terrorism on American soil. Their other thriller titles include Vengeance Is Mine, Stand Your Ground, The Blood of Patriots, Home Invasion, Jackknife, Remember the Alamo, Suicide Mission, and The Bleeding Edge.

The Johnstones know that freedom is never free. They fully support our military and regularly donate books to our troops. You can learn more about this as well as upcoming releases and special promotions by visiting williamjohnstone.net or kensingtonbooks.com.
Loading...
or support indie stores by buying on
(This book is on backorder)