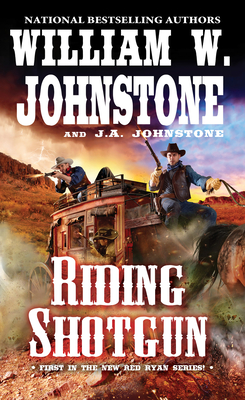 JOHNSTONE COUNTRY. WHERE DEATH RIDES FASTER THAN THE WIND.

A blazing new series takes you back to the lawless frontier where every stagecoach was a moving target. Where every passenger needed protection. And where every hired gun who rides along better be fast on the draw—or be dead on arrival . . .

If anyone knows the road to purgatory, it’s Red Ryan. As a stagecoach guard, he’s faced holdups, ambushes, and all-out attacks from every kill-crazy outlaw, Indian, and prairie rat. But even he’s a bit reluctant to take on his next job: riding shotgun with his driver Buttons Muldoon on a stage bound from Fort Concho, Texas, to Fort Bliss. Word has it, the Apaches are on the warpath. They’re being led by the vicious war chief Ilesh, which means “Lord of the Earth.” And this lord means business, as in slaughtering every Texan from here to El Paso. Red wants to postpone the stage. But an army major’s beautiful but stubborn wife insists they leave—or she’ll go it alone. So Red has no choice . . .

Thus begins a nightmare journey into 400 miles of harsh, unforgiving terrain, blood-drunk killers, and one scheming devil who plans to paint the town of El Paso red—starting with Red’s blood . . .

“Every day with Bill was an adventure story in itself. Bill taught me all he could about the art of storytelling. ‘Keep the historical facts accurate,’ he would say. ‘Remember the readers, and as your grandfather once told me, I am telling you now: be the best J.A. Johnstone you can be.’”
Loading...
or support indie stores by buying on
(This book is on backorder)