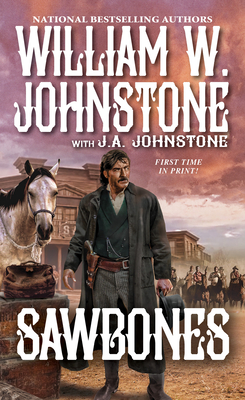 Bestselling authors William W. Johnstone and J.A. Johnstone give the classic American hero a real shot in the arm—in this epic story of a Rebel doctor fighting for justice in the aftermath of the Civil War . . .

VENGEANCE WITH A SCALPEL

On the blood-stained battlefields of a divided nation, Dr. Samuel Knight used his surgical skills to treat wounded Confederate soldiers. In the brutal prison camps of the Union Army, he offered his healing services to fellow captives who’d given up hope. But now, with the war over and the South in ruins, the good doctor faces his hardest challenge yet: to save himself . . .

Penniless and hungry, Knight has to beg, borrow, and steal to survive in a post-war hell that used to be his country. By the time he reaches his home in East Texas, it’s been taken over. Ruthless Union soldiers rule over the town with an iron fist. A Yankee carpetbagger is living in his old house—and the jackal has forced Knight’s wife to marry him. A normal man might give up, but Dr. Samuel Knight is going to take back what belongs to him. With a heartfull of grit and a hunger for revenge and with swift, surgical precision, he’ll stick a bullet in every dead man walking . . .