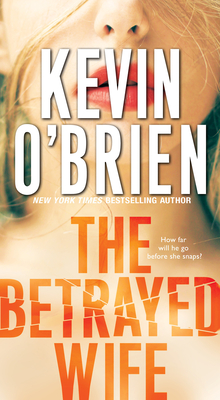 THE PERFECT FAMILY
Sheila O’Rourke has always known her husband isn’t perfect. Who is? But things have been better since they moved to Seattle to make a fresh start. So much so that when sixteen-year-old Eden turns up, claiming to be Dylan’s child by another woman, Sheila tries to be welcoming.

CAN BECOME
At first, Sheila feels sympathy for the girl. Eden’s mother recently fell to her death in an incident with unsettling parallels to Sheila’s past. Still, Eden is a difficult house guest, sowing discord among the family. Sheila has already been on edge for weeks, receiving anonymous texts, noticing odd noises coming from the house next door. And that’s just the start.

A PERFECT NIGHTMARE
Sheila wants to trust Dylan. She wants to feel safe in her own home. But no one can hurt you more easily than the ones closest to you . . . the ones you keep believing until it’s too late . . .

“Terrifying and fast-paced … Kevin O'Brien (Unspeakable, Killing Spree) has written a thriller that ratchets the tension high. Fans of Karin Slaughter or David Baldacci are sure to find it irresistible.” —Shelf Awareness on They Won’t Be Hurt

“A page-turner wrapped around one of today’s pressing issues: school bullying.” —Publishers Weekly on You’ll Miss Me When I’m Gone

“The suspense builds from page one and ends with a climax you won’t see coming.” —Suspense Magazine on You’ll Miss Me When I’m Gone

“If you want darkness, if you crave chills, this tale is for you.” —Suspense Magazine on Tell Me You’re Sorry

“If Hitchcock were alive today and writing novels, his name would be Kevin O’Brien.” —Press & Guide on Unspeakable

“His best book to date. Unspeakable will be talked about for years to come.” —RT Book Reviews, Top Pick on Unspeakable

“Unspeakable is a pure adrenaline rush, a thriller that earns that label on each and every page”. —Mystery Scene Magazine on Unspeakable

“A genuine page-turner.” —The Seattle Times on Terrified

“O’Brien in Terrified leads the reader on a wild ride that roars along like a rollercoaster that builds momentum to its final page turning conclusion.” —West Orlando News on Terrified

“O’Brien is a master at ratcheting up the suspense and doing the thing that all suspense writers long to do: keep us compulsively turning the page in an almost frantic quest to find out what happens next.” —Dark Scribe Magazine on Vicious

”Another unforgettable story… you will want to read Final Breath in one sitting, even if it keeps you up at night.” —Bookreporter.com on Final Breath

“White knuckle action! Kevin O’Brien takes the reader deep into the darkest corners of the human mind, where one woman’s past threatens to wipe out her future.” —Tess Gerritsen, New York Times bestselling author

“The Last Victim is a fascinating combination of flashbacks, [the] gradual revelation of an amazingly dysfunctional family, and page-turning suspense. O’Brien has a deft touch, drawing believable portraits of weird people, while providing a complex plot that will keep the reader guessing up to the last page. Highly recommended.” —I Love a Mystery Newsletter on The Last Victim

“O’Brien’s latest thriller offers up a relentless dose of suspense and chills that is sure to please fans of psychological suspense. There are just the right amounts of twists and turns in this wild ride through terror, and the final denouement will leave the reader gasping. Highly recommended”. —New Mystery Reader on Left For Dead

“Fast-forward to Scary as Hell! Read this page-turner with the lights on!” —Lisa Jackson, New York Times bestselling author

“Exciting and fast-paced… This is a first-rate murder-mystery in an unusual setting, with an exciting ending… Imaginative and well-written… Add this book to your summer reading list.” —The Times Record News on Make Them Cry

“O’Brien is full of surprises in this deep and moving story. The characters are truly drawn… Four Stars!” —The Detroit Free Press on Only Son

KEVIN O’BRIEN grew up in Chicago’s North Shore, but now lives in Seattle, Washington, where he is currently working on his next thriller. Readers can visit his website at kevinobrienbooks.com.
Loading...
or support indie stores by buying on