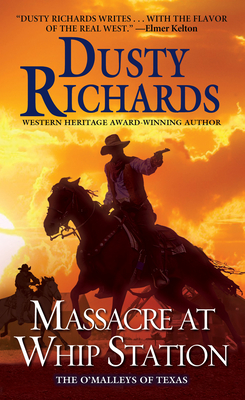 Massacre at Whip Station (The O'Malleys of Texas #3)

From Western Writers of America Spur Award-winning author Dusty Richards comes a blistering new novel in his O’Malley saga, trailing one family’s epic struggle to live out their dreams on the deadly battleground of the Texas Frontier . . .

Whip Station, a critical stop on the Butterfield stagecoach line, is dead smack in the middle of no-man’s land. The lawless call it an easy target. Joe O’Malley calls it home. If anybody can tame a wild, violent territory, it’s the seasoned frontiersman. So can his family, who have the same pride and honor coursing through their veins.

Helping to plant roots is his son Jackson, a former wrangler married to a steadying force of nature. Joe’s grandchildren have their own brand of grit. The boy—a firebrand with a knife. The girl—book-smart and wicked-wise. But Whip Station is also hunting ground for Mexican revolutionaries, savage Indians, post-war renegade Confederates, and the deadliest outlaws who ever drew a breath. It’s time for the O’Malleys to take aim. With a rawhide-tough will to survive, they’re banding together to protect their future against the most savage odds imaginable.

“Dusty Richards is the embodiment of the Old West.”
—Storyteller Magazine

Western Heritage Award and three-time Spur Award-winning author Dusty Richards was the author of over 100 acclaimed westerns. He spent his youth in Arizona and worked as a rancher, auctioneer, rodeo announcer, and TV anchor before he moved to writing full time, going on to become the only author ever to win two Spur Awards from Western Writers of America in one year (2007). He received his third Spur Award for The Mustanger and the Lady, which was adapted into the film “Painted Woman.” An inductee of the Arkansas Writers Hall of Fame, Dusty was also the recipient of the Will Rogers Medallion Award for Western Fiction and was honored by the National Cowboy Hall of Fame in 2009. He was a member of the Professional Rodeo Cowboys Association and the International Professional Rodeo Association, and served on the local PRCA rodeo board.
Loading...
or support indie stores by buying on