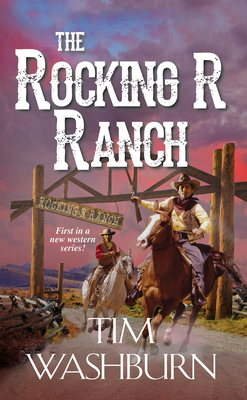 AN AMERICAN DREAM IN THE MAKING

From acclaimed storyteller Tim Washburn comes a thrilling new saga of the Old West, the sprawling story of one frontier family—and the Texas home they fought for, lived for, and died for . . .

When the Ridgeway family staked their claim on more than 40,000 acres of land in northwest Texas, they knew they had their work cut out for them. Located on a sharp bend of the treacherous Red River, their new home—the Rocking R Ranch—was just a stone’s throw away from Indian territory. It was as lawless and wild as the West itself, crawling with unsavory characters, cattle rustlers, horse thieves, outlaws, robbers, and worse. But still, the Ridgeways were determined to make the Rocking R a success—and a home—for their four remarkable children: Percy, Eli, Abigail, and Rachel. This is their story.

Together, the Ridgeways could endure anything. Floods, tornadoes, Commanche raids in the dead of night. But when one of their own is kidnapped . . . that’s when all hell breaks loose.

This is their story. The story of the American West.

Tim Washburn is the author of POWERLESS, CATACLYSM, THE DAY AFTER OBLIVION, and CYBER ATTACK. A father of three, Tim and his wife live in central Oklahoma, deep in the heart of Tornado Alley. Tim Washburn is a member of the International Thriller Writers, the Authors Guild, and the Western Writers of America.
or support indie stores by buying on
Copyright © 2020 American Booksellers Association